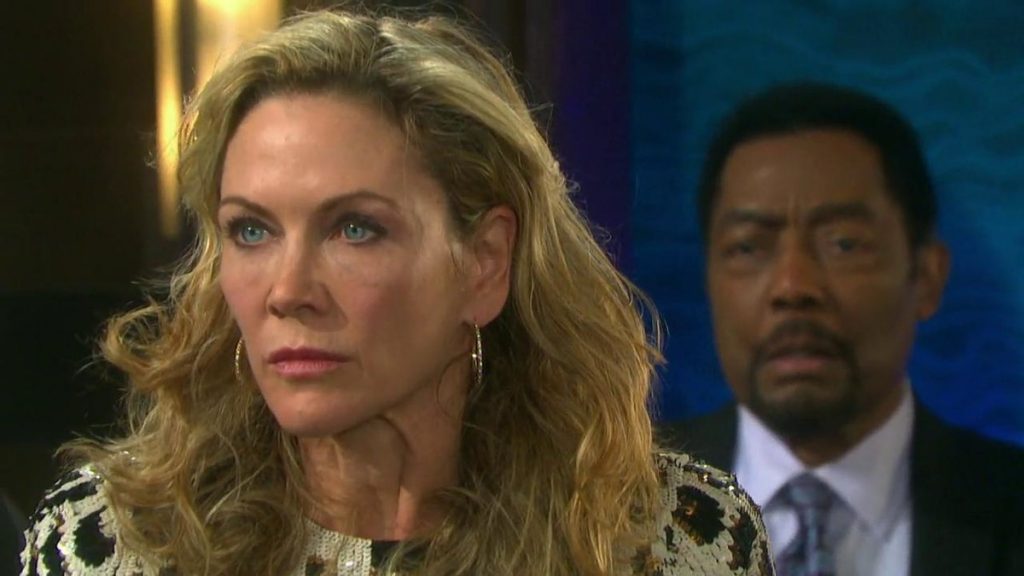 Days of Our Lives (DOOL) spoilers tease that there are five key takeaways for the fans to watch for in the week of Monday, August 26 through Friday, August 30.

Kristen DiMera, (Stacy Haiduk) who was unmasked and discovered to have been impersonating a presumed-dead Nicole Walker (Adrienne Zucker) tries to make a deal with Salem Police. She offers information on the location of the real Nicole and her daughter, Holly Jonas (Scarlett and Harlow Mallory) who had been presumed dead in a staged car crash and explosion several months ago.

Tony DiMera (Thaao Penghlis) also is arrested by new Salem Police Commissioner Eli Grant (Lamon Archey) and Lani Price (Sal Stowers), and although Tony makes an admission to Anna DiMera (Leann Hunley) it’s doubtful that she would turn him in even if he tells her he accidentally shot Ted Laurent (Gilles Marini) and killed him in self-defense.

More than likely, the admission is about the missing Stefan and Gabi DiMera (Brandon Barash, Camila Banus). Kristen flips on Tony and tries to frame him for Ted’s murder before she tries making a deal with police. However, Anna will encourage Tony to use what he knows about the whereabouts of Stefan and Gabi as leverage with the police. Eric and Jennifer Horton (Melissa Reeves) work on Jack Deveraux (Matthew Ashford) to take Kristen’s deal.

Tripp Dalton (Lucas Adams), after having admitted to his stepmother Dr. Kayla Johnson (Mary Beth Johnson) that he is falling in love with his cousin JJ Deveraux’s (Casey Moss) girlfriend, Haley Chen (Thia Megia) decides to move out of town to attend medical school elsewhere. JJ and Haley had already decided to move from the loft, which would have left Tripp in the lurch to pay the rent anyway. On the same day Tripp leaves, Chloe Lane (Nadia Bjorlin) leaves Salem as well, having successfully passed her audition and taken a dream job with a touring opera based out of New York City. Both Tripp and Chloe tell friends and family goodbye!

The search for the real Nicole Walker and her daughter Holly begins when Eric and Jennifer Horton (Melissa Reeves) work on Jack Deveraux (Matthew Ashford) to take Kristen’s deal. In the process, challenges arise for Eric and Sarah Horton Brady’s (Linsey Godfrey) relationship when Eric finds out that the real Nicole is alive and takes off for Chicago with Jack and Jennifer to search for Nicole and Holly there. Jack and Jennifer may be searching for Dr. Wilhelm Rolf (William Utay) and a new laboratory there as well, to find out if new amnesia serum can be created.

Wei Shin (Michael Hagiwara) convinces Kate DiMera (Lauren Koslow) to take his job offer to become CEO of DiMera Enterprises, in the wake of the exposure of “Nicole Walker” as Kristen DiMera and the disappearance of Gabi and Stefan DiMera (Camilla Banus, Brandon Barash). Once Gabi and Stefan have been found and rescued from the secret room/wine cellar by Sonny Kiriakis (Freddie Smith) and Will Horton (Chandler Massey) after they overhear Tony DiMera talking about it to Kristen, Kate delivers the news to Gabi and Stefan, and they are NOT happy campers!

Days of Our Lives Spoilers: The Real Nicole is Alive, Eric Frantically Searches for Love of His Life https://t.co/WEO00pqdLP pic.twitter.com/8jQSz4CLyo

While still trapped in the secret room in the DiMera mansion, Stefan and Gabi, not knowing if they will be rescued or if they will die in there, finally put away their respective stubborn pride and admit their true feelings for each other, and are making out as Will and Sonny open the door! Both will take concern for their daughter Arianna Horton (Harper and Sydnee Udell) and will not be so sure they want her to live with Stefan!