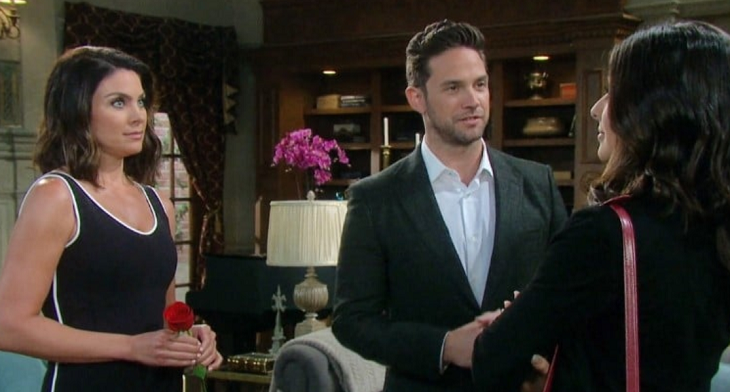 Hope tells Rafe that Ciara Brady (Victoria Konefal) is doing good. Hope tells Rafe she could have lost him and Ciara in the same day. Rafe apologizes for not being there for Hope and Ciara. Hope helps Rafe make a bottle for baby David. She tells Rafe she talked to Kayla Johnson (Mary Beth Evans) yesterday and got some excellent advice.

Hope wants to work on their marriage, Lani Price (Sal Stowers) interrupts their conversation after hanging up with Eli Grant (Lamon Archey). Lani takes the bottle to feed the baby. Hope starts to leave, Rafe tells her this isn’t what it looks like, Lani is there for the baby. Hope and Rafe begin to argue about Lani; they decide to change the subject. He suggests Hope ask Ted Laurant (Gilles Marini) what he is keeping from her; Hope looks confused.

Rafe tells Hope that Eli overheard Ted on the phone last night saying he didn’t want Hope to know who he was talking to on the phone. Hope leaves saying she will speak to Rafe later. Hope calls Ted, and she needs to speak with him as soon as he gets her message.

Days of Our Lives’ Sheila Watkins (Tionne “T-Boz” Watkins) and Abe Carver (James Reynolds) meet at the pub, and she updates him on poll results. Sheila suggests that Abe get married too since it helped Jack Deveraux (Matthew Ashford) in the polls. Abe tells Sheila he’s not going to use marriage as a publicity stunt. Sheila tells Abe that Valerie would accept his proposal in a heartbeat. They argue over which one of them tried to kiss the other, Jack interrupts. 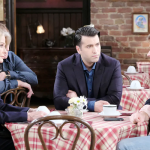 ‘Days Of Our Lives’ Spoilers Wednesday, April 24: Marlena’s Major Slipup – Will Explodes at His Loved Ones – Gabi Covers for Stefan

Sheila asks what Jack’s problem is, Abe sends her back to the office. Abe tells Jack that he and Sheila were arguing about his sham of a marriage. Jack says the wedding is helping him in the polls. Sheila speaks to Eli in the square and tells him he needs to get Valerie Grant (Vanessa Williams) home now. Abe joins Sheila and assures her Jack has no idea what they were talking about at the pub.

Days of Our Lives’ Jack is dreaming about Loretta when Eve Deveraux (Kassie DePaiva) wakes him up. Jack pretends not to know anyone named Loretta but is disturbed by memories of his conversation with Jennifer Horton (Melissa Reeves). Jack tells Eve he is 100% dedicated to her; they begin to kiss. Jack and Eve head to the pub for breakfast but Chloe Lane (Nadia Bjorlin) stops them; she needs to speak to Eve.

Chloe congratulates Eve on her marriage, and she deserves some happiness. She wants to talk about Stefan DiMera (Brandon Barash) with Eve. Chloe tells Eve that Stefan wants a relationship with her. Eve tells Chloe she can’t talk her out of getting into a relationship with Stefan. Eve advises Chloe to take happiness where she can get it. She claims to be happy and in love with Jack. She tells Chloe she could do a hell of a lot worse than Stefan, grab him before he’s gone. Eve later joins Jack at the pub; he thinks Abe and Sheila have something going on but doesn’t know what it is.

From hot to HOTTER. #DAYS pic.twitter.com/V6v9Xis32D

Days of Our Lives’ Stefan is in bed with Gabi Hernandez (Camila Banus) and calls Chloe. Gabi wakes up as Stefan is talking and helps Gabi get dressed while he’s on the phone with her. She can’t believe Stefan asked Chloe out while in bed with her. Stefan questions why Gabi acts upset when their hookup was her idea. Gabi tells Stefan he doesn’t get to treat her like a whore and grabs him by the crotch making him scream.

Stefan tells Gabi he kept her secret and didn’t ruin her reputation. Gabi starts to slap Stefan again, but he stops her. Stefan tells Gabi she will never touch him again, the two banter back and forth until they end up back in bed. Gabi says she didn’t mean for them to have sex again.

Gabi asks if Stefan is going to wait by the phone for Chloe to call him. Gabi discovers she has a button missing as Chloe enters downstairs and calls to Stefan. Chloe finds Gabi’s button on the floor. Gabi comes downstairs pulling on her clothes, Chloe shows her the button asking if it’s hers. Stefan comes downstairs behind her buttoning his shirt, Chloe wants to know who wants to explain first.

Days of Our Lives’ Maggie Kiriakis (Suzanne Rogers ) tells Brady Black (Eric Martsolf) she is taking the kids out for ice cream and invites him to join them. Brady doesn’t think Chloe wants to see him. Maggie tells Brady he is acting like an obsessed stalker and needs to take a step back and see why he is behaving this way.

Brady tries to convince Maggie that part of him still loves Chloe even though they broke up because they weren’t there for each other. Maggie tells Brady that he has jumped from relationships too quickly in the last few years. Brady admits to using relationships in place of losing his sobriety. Maggie says Brady needs to set back and take some time for himself and let a relationship happen on its own. Brad hugs Maggie and thanks her for her encouragement.

Days of Our Lives Spoilers: Maggie’s Flashbacks Coming Together –…