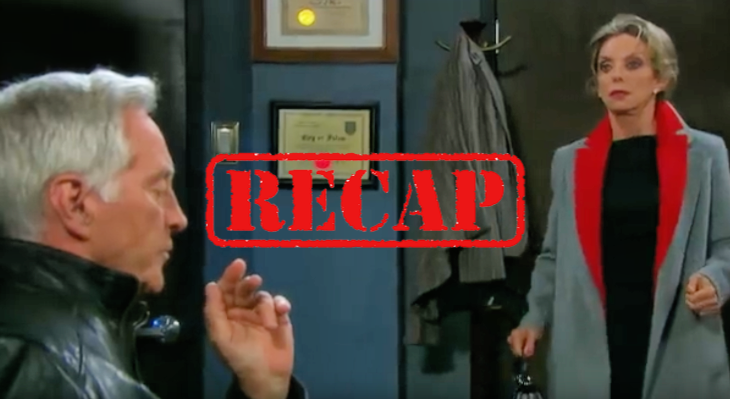 Days of Our Lives (DOOL) recap for Monday, March 25, 2019, reveals Rafe Hernandez (Galen Gering) is drinking at the pub when Kate Roberts (Lauren Koslow) knocks on the door.

Days of Our Lives’ Hope is at Stefan Dimera’s (Brandon Barash) with Ted investigating the shooting. Stefan tries to distract Chloe Lane (Nadia Bjorlin) after the gunman shot into the mansion. Chloe is too nervous to do anything right now. Stefan gets on his knees and begs her to sing to him. Stefan is mesmerized by Chloe’s singing. Stefan compliments Chloe and gets a call from Ben saying Brady Black (Eric Martsolf) is there. Chloe asks Stefan to let Brady come in; he is still her friend.

In the latest #DAYS, John and Leo get to know each other. https://t.co/ZsCmioRrzb pic.twitter.com/ltoEgczfQX

Brady comes in berating Stefan for not keeping Chloe safe. Brady demands Chloe leave and go home with him. Brady questions if Chloe has feelings for Stefan. Brady asks Chloe about sharing a kiss with Stefan. Chloe tells Brady that Stefan isn’t as bad as he thinks. Chloe asks why it matters to Brady; Brady grabs Chloe and kisses her. Stefan sees Brady and Chloe kissing, Stefan calls to Chloe telling her Holly Jonas (Hallow and Scarlett Mallory) calling to her. Chloe dismisses Brady and Stefan asks him to leave, Brady warns Stefan against using Leo Stark (Greg Rikaart) the next time he wants to commit espionage. Chloe comes back and tells Stefan that Holly was asleep. Chloe goes upstairs to bed, and Stefan curses Brady.

Days of Our Lives’ Brady and Leo show up in Marlena Evans (Diedre Hall) hospital room looking for John Black (Drake Hogestyn). Marlena tells them John is busy right now. Marlena asks Leo what he needs to see John about, Leo needs rent money for the Salem Inn. Marlena writes Leo a check for one hundred dollars. Leo thanks Marlena and apologizes for getting off on the wrong foot with her. Marlena gets a call from Eli says Diana confessed to poisoning Marlena. Kate brings flowers to Marlena who informs her that Kristian Dimera wasn’t her attacker, Leo’s mother was.

In the latest #DAYS, John sets a trap for an unsuspecting Diana.https://t.co/ZsCmioRrzb pic.twitter.com/Amc9qwKb3y

Days of Our Lives’ John is sitting in the evidence room when Diana Cooper (Judith Chapman) breaks into the room. John holds up the evidence bag and asks if that is what she’s looking for now. Diana says John misunderstands what is going on with her. Diana says she is shocked that John would accuse her of attempted murder. John says Leo warned him that Diana was the culprit. John tells Diana how he set her up to try and steal the evidence.

Days Of Our Lives: Diana Cooper Admits To Changing the DNA Results

Days of Our Lives’ Leo comes in and tells Diana it’s a good thing she will be behind bars. Leo tells Diana that John and Marlena are his family now. Leo is happy to be rid of her, Leo is happy to call John his father. Diana says she made the whole thing up, and John is not Leo’s father. Diana says she found the DNA test on the desk and changed the results to make John Leo’s father.

Leo says this can’t be right, Diana tells them to repeat the test, they will find out the truth. Leo leaps across the desk and begins to try to choke Diana. John pulls Leo off Diana and offers to be there if Leo needs him. Diana says Leo will be back; John says he’s a fool to come back. Diana begs John not to turn his back on her; John says that is what she deserves and walks off. Ted arrives and recognizes Diana. Diana asks about Ted’s wife who supposedly died two years ago. Diana claims to have seen her six months ago.

Hope has a bone to pick with Ted. #DAYS pic.twitter.com/d4IL8fP5m8

Days of Our Lives’ Hope tells Ted he needs to stop pretending that she isn’t a married woman. Ted pretends not to do it on purpose. Hope tells Ted to stop flirting with her; he promises to try. Rafe is putting on his jacket to leave when Hope comes in and pulls Rafe into a kiss. Hope apologizes for going before. Rafe understands and tells Hope he doesn’t like that Ted interrupted them. Hope tells Rafe she will handle it if Ted crosses the line and asks Rafe to trust her, he says ok. Hope thanks Rafe for setting this up tonight. Rafe says they still have some issues to work out. Hope agrees and says I love you, we will work them out. 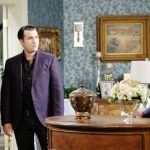 Days Of Our Lives Spoilers Tuesday, March 26: Leo Puts Deadly Curse on Will – Brady’s Ultimatum – Ciara And Ben Heat Up