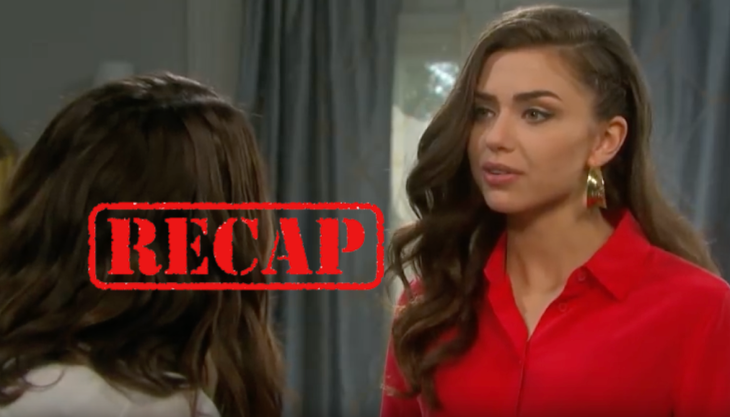 Hope tells Ted that he owes her for protecting him and its time he pays up. Ted tells Hope she hates Stefan as much as he does and there must be something else involved. Hope tells Ted that she needs Ben (Robert Scott Wilson) out of Ciara’s (Victoria Konefal) life. Hope wants Ted to offer to represent Stefan and get him to turn on Ben. Stefan tells Hope the cases aren’t connected and he cannot offer Stefan a deal.

Hope tells Ted to be creative; she can’t lose another child. Ted agrees to do what he can, Rafe (Galen Gering) walks in and sees them shaking hands on this deal. Hope tells Rafe she asked Ted to represent Stefan for the greater good. Stefan agrees to let Ted represent him. Ted tries to get Stefan released, but the judge isn’t available until tomorrow. Ted tells Stefan he has to stay in jail for the night.

Days Of Our Lives Spoilers Ciara Pays Abby A Visit

Days of Our Lives Ciara is visiting with Abby (Kate Mansi) and asks about her and Chad (Billy Flynn) reuniting. Abby can’t forgive Chad for everything he did to separate her from her baby. Abby tells Ciara that Ben is dangerous. Ciara questions why who she dates is any of Hope’s business. Ciara tells Abby that Ben was mentally ill but beat it and that she should understand that more than anyone. Ciara tells Abby that she was ill and got better and asks if it’s not possible that Ben could get better too.

Abby understands Ciara’s perspective but doesn’t think it’s true when it comes to Ben. Abby says Ciara needs to be very careful especially since Ben is working for Stefan. Ciara asks if Ben did something to her. Abby doesn’t think Ciara should be with someone like Ben he killed three people. Ciara tells Abby she doesn’t want Ben working for Stefan, but no one else would hire him.

Ciara tells Abby that Stefan had Ben kidnap Gabi. Abby and Ciara agree that Ben shouldn’t have down that. Ciara asks if staying with Ben makes her complicit in what he is doing. Ciara believes that is turning against all woman for what she has been through with men. Abby tells Ciara to walk away while she can. Abby can’t believe that Ciara has such strong feelings for Ben. Ciara didn’t ask Ben to give up his job because she wanted him to come up with the decision on his own.

Days of Our Lives Rafe informs Stefan that the Dimera lawyers won’t represent him they are doing damage control. Rafe goes to speak to Stefan who tells him that Hope is working to help him. Stefan tells Rafe that Hope is only worried about Ben. Stefan tells Rafe its hard learning that your wife is keeping secrets from you and he knows the pain.

Rafe accuses Stefan of trying to drive a wedge between him and Hope. Stefan tells Rafe to asks Hope. Rafe tells Hope she is crossing too many lines to get what she wants. Rafe tells Hope they have done this before and she will eventually be on the wrong side of the law if she’s not careful.

Days Of Our Lives Kate Asks Chad To Take Over Dimera

Days of Our Lives’ Chad asks Julie (Susan Seaforth Hayes) to set up a romantic dinner for Abby. Kate (Lauren Koslow) wants to speak to Chad alone; he wants nothing to do with her. Kate has to tell him something about Stefan. Kate tells Chad that Stefan is out as the head of Dimera and they want to replace him with her. Kate tells Chad the company is his legacy and asks if he wants the job or not. Chad tells Kate he doesn’t want it but thanks of the vote of confidence.

Xander and Leo team up to take over, and Haley has a secret. Watch #DAYS, weekdays on NBC. pic.twitter.com/LGks6xugLY

Kate tells Chad this is the whole reason he went to Titan so he could get Dimera back. Chad tells Kate he was headed down a very dark road and didn’t care about anyone. If running Dimera means hurting those he loves he doesn’t want to do it. Chad takes off his ring. Kate tells Chad to put the ring back on, take over Dimera and make it his own. Ben goes to that mansion and thinks he is talking to Stefan. Ben says he can’t work for him anymore. Chad gets up and tells Ben that he is the head of Dimera now, and tells him about Stefan’s arrest. Chad informs Ben that he works for him now.

Days Of Our Lives Chad Apologizes To Gabi

Days of Our Lives’ Ben runs into Gabi in the park; she threatens to scream. Ben tells Gabi he isn’t going to hurt her. Gabi says he left her alone with Stefan and he’s a crazy man. Gabi asks Ben if he knows what Stefan did when he left. Gabi tells Ben what Stefan did the next morning. Ben apologizes for what the did. Gabi says he is still working for the maniac.

Ben tells her Stefan is the only one who would give him a job and he needed to get back on his feet. Gabi hopes that Ciara breaks up with Ben over the kidnapping. Julie runs into Gabi in the square and can’t believe that she is free. Gabi tells Julie that Abby didn’t press charges and there is nothing she can do to change that. Julie doesn’t believe that Abby would do this. Julie threatens to go to the law and press charges against Gabi. Gabi tells Julie if she messes with her she will shut her mouth for good.