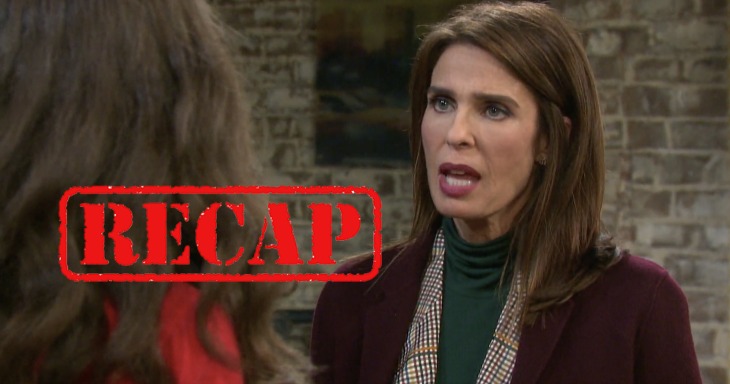 Days of Our Lives (DOOL) recap for Friday, January 4, 2019, reveals Eve (Kassie DePaiva) acts shocked the Jack (Matthew Ashford) accused her of lying to him.

Eve tells Jack they get along well and neither of them is afraid to go after what they want. Eve tells Jack about Daniel (ex-Shawn Christian) and Jennifer and tells him nice guys finish last. Jack says he shouldn’t have sent Abby (Kate Mansi) away. Eve tries to keep Jack from going to see Abby. Jack wants to see his grandchildren. Jack wants the truth; Eve says she’s the only person not trying to force him to be who he was.

Can their hearts find a way back to each other? #DAYS pic.twitter.com/Lcysq6R2va

Eve tells Jack he doesn’t belong with Jennifer and suggest they get together again. Eve tells Jack they never mad love while they were married, but they have now, new year, a new man, new life and she kisses him.

Roman tells Jennifer she should be glad Jack is alive. Kayla (Mary Beth Evans) goes to see Jennifer; she tells Jennifer she put in a call to Seth about the notes and serum for Jack. Kayla says she told Steve who is thrilled and is sorry he can’t be there. Roman tells Kayla the grand jury met to decide whether or not to indict Stefan (Tyler Christopher). Jennifer goes home to check on Abby. Jennifer says she heard Abby saw Jack. Abby says they have to work at helping Jack. Jennifer agrees they have to do something before Eve talks him into doing something that he can’t take back.

Days of Our Lives’ Stefan approaches Kayla at the hospital and says things seem to be getting better all the time. Kayla tells Stefan she is thrilled that Abby’s baby belongs to Chad and not him. Stefan filed a complaint against Kayla because Gabi changed the test results. Kayla tells Stefan he used Steve’s (ex-Stephen Nichols) eye to steal information. Stefan implies that Steve is the traitor, he says he has tried everything to help Steve that he can.

Days of Our Lives #DOOL Spoilers: JJ Confronted About Latest Cover-Up, But Is Haley Worth the Risk? @HollywoodHiccup https://t.co/OhOQgEnvUk

Days of Our Lives’ Chad (Billy Flynn) is talking to Charlotte about what an ass he has been and told her he wants to put her family back together. Abby asks why Chad is there, he tells her he asked to hold Charlotte and J.J. (Casey Moss) left him with her. Abby thought Julie (Susan Seaforth Hayes) was watching the baby and it wasn’t J.J.’s decision to make. Chad tells Abby they need to set up a schedule for seeing the kids if she’s going to be mad over him visiting.

Chad is afraid Abby won’t let him visit with Charlotte. Chad tells Abby he hopes Gabi (Camila Banus) spends the rest of her life in prison. Chad is stunned that Abby isn’t pressing charges. Abby wants to move on from the anger and get on with her life. Chad wants Gabi to suffer every day of her life for what she did to Abby. Chad tells Gabi he is no longer at the Kiriakis mansion because Victor (John Aniston) fired him. Abby asks Chad where the man she married is.

Chad tells Abby he lost his way, she says his father would be proud. Chad tells Abby he is going to try to make things up to everyone including her. Abby tells Chad that is not going to happen. Chad asks Abby for another chance, but she refuses. Abby tells Chad she can never look at him and not see the man who ripped her baby out of her arms and had her committed. Chad vows to make things right. Chad runs into Gabi on the way home, he hasn’t forgotten what she did and will never forgive her.

Days Of Our Lives Rafe Goes After Stefan

Days of Our Lives’ Hope (Kristian Alfonso) and Rafe (Galen Gering) are stunned that Abby isn’t going to press charges against Gabi. Rafe tells Gabi he doubts the D.A. will press charges against him. Gabi tells Hope and Rafe that Stefan kidnapped her when they thought she had left town. Hope demands to know why Gabi didn’t say anything sooner.

Rafe goes after Stefan as a brother, not a cop; Hope tries to discourage that. Rafe tells Hope he supported her with Ted (Gilles Marini) she should be supporting him now. Hope wants Gabi to make a statement, Gabi tells her Ben grabbed her. Rafe goes to Stefan’s and grabs him as he walks through the door. Rafe starts to leave Stefan’s but gets a call before he goes out the door. Rafe arrests Stefan for treason.

I love the way they look at each other 🔬🔥 #Cin #days pic.twitter.com/iSoQQgh3xV

Days of Our Lives Ben shows up at Ciara’s door with roses to apologize for canceling their date on Christmas. Ciara tells Ben she isn’t a roses kind of girl, he offers to get her any flower she wants. Ciara asked what Ben did for Stefan Christmas night; he says just regular stuff. Ben feels sorry for Stefan; he knows what it is like to lose a baby that you thought was yours.

Ciara is glad that Chad has his baby. Ciara tells Ben how good Chad is with the kids. Ben tells her he gets it; he was terrible to Chad and Abby. Ciara takes Ben for a ride; he tells her she’s a speed demon. Ciara tells Ben she wanted him to hold on tighter and it worked. Ben says he should get going, Ciara invites him to stay longer. Ben and Ciara are kissing when Hope knocks on the door. Hope tells Ciara that Ben kidnapped Gabi. Ciara asks Ben if this is true.

Bold and the Beautiful Recap Friday, January 4: Hope and Liam Mourn For Their Daughter