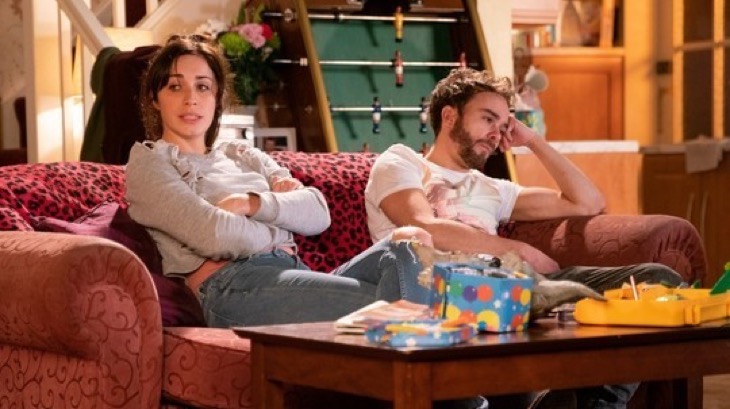 Say it isn’t so! There are new Coronation Street spoilers that tease a possible breakup between David Platt  (Jack P. Shepherd) and Shona Ramsey (Julia Goulding) after their shock betrayal. As a matter of fact, David will reach his own breaking point as he tries to find clues about his girlfriend’s sketchy behavior. Here’s what you need to know.

It all begins when Shona finds a DVD that has been left in front of her door. She is left absolutely shocked when she watches it as it features both her and David sleeping in their beds. She believes that Clayton Hubbs (Callum Harrison) might be behind the clip. However, her murderous son will reveal to Shona that several bullies in prison are actually behind the DVD. Clayton is currently behind bars after he murdered David’s wife, Kylie Platt.

If that weren’t enough, Clayton then tells his mother that if he doesn’t help him move to an open prison, the bullies will go after both him and her. Apparently, he wasn’t lying as Shona finds herself cornered by several thugs at the barbershop.

"I have to help him."
Well that went down well… Can Shona help Clayton and remain in a relationship with David?
See you Friday!#Shona #David #Clayton #Corrie pic.twitter.com/7ds9bQh1f6

Luckily, David’s brother Nick Tilsley (Ben Price) will appear in the nick of time to find out what is going on. A suspicious Nick follows Shona and spots her handing over a package to two people from the barbershop. He then confronts her and tells her to come clean to David about what’s been going on.

From there, it just gets worse for Shona. She ends up in the hospital to see her child only to feel crushed after he tells her that he wishes she had died and not his father. In the meantime, Shona’s bizarre behavior will drive David crazy as he is desperately trying to find out what is going on.

Coronation Street airs weeknights on the ITV network and is available on Britbox in the U.S. And Canada. Let us know your thoughts below. And don’t forget to come back to Soap Opera Spy for all the latest news, updates and spoilers on Coronation Street and your favorite British soaps right here.

Days of Our Lives Spoilers: Chrishell Hartley Opens Up About How Jordan Has Changed