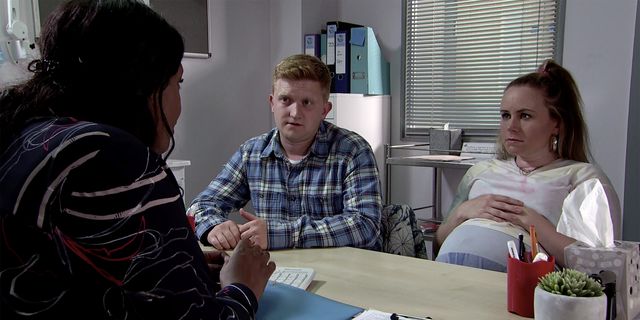 Coronation Street spoilers tease that it’s been one very wild ride for Gemma Winter (Dolly Rose Campbell) and Chesney Brown (Sam Aston) and it seems as though it’s going to get even wilder, and even more emotional and heavy in the coming weeks. And no, it’s not what you are thinking. Here’s what you need to know.

Coronation Street Spoilers: Heartache On The Way For Gemma Winters

Apparently, Gemma and Chesney will soon find out that one of their four babies is not developing as much as the other babies. In fact, a new Coronation Street teaser shows a doctor telling a stunned Gemma and Chesney that there’s a strong possibility one of their babies is underdeveloped. This is terrifying news for the young couple.  They have been doing everything they can to prepare for the arrival of their four babies.

The parents-to-be are told by a sonographer that one of the babies is quite a lot smaller than the other siblings. Gemma and Chesney are told not to worry about it right now. But have been advised to come in for weekly scans to see if the baby is progressing along with the other brothers and sisters.

Coronation Street spoilers tease that this is definitely going to give Gemma a reason to stay up at night. Clearly, the future mum wants all of her babies to be born healthy as they can be.

Additional teasers also suggest that Chesney plans to ‘man up’ so to speak and propose to his baby mama. However, the proposal is going to go anything but smooth. The moment that Chesney gets down on one knee, a heavily pregnant Gemma will be hit in the head by a football!

If that weren’t enough, it also appears as though Gemma’s labor and delivery will be anything but undramatic. That’s because the babies will decide to come out early during the couple’s babymoon to Wales. Teaser photos suggest that Gemma will go into labor while the two are up in the sky in a cable car. And wouldn’t you believe, they also get stuck in one, too! Yikes! Will Chesney be forced to deliver all four babies on his own? Fans will have to tune in to find out what will happen next!

The Bold And The Beautiful Spoilers: Who Will Wyatt Choose – Flo Or Sally?