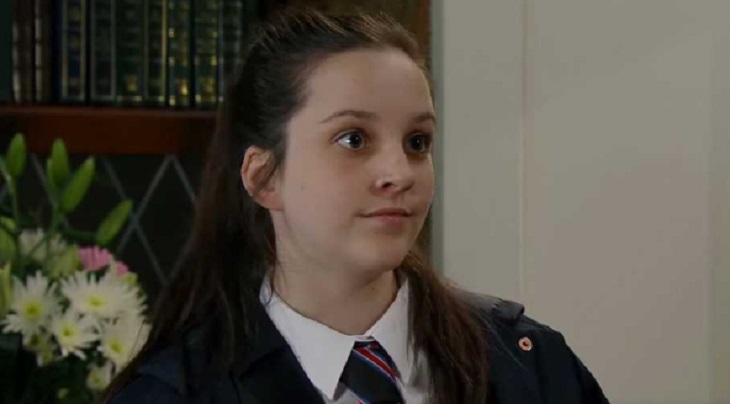 After weeks of Amy Barlow trying to keep her mouth shut about who the father of her baby is, Coronation Street  spoilers have finally confirmed that it is Tyler Jefferies. Yes, the gang leader who put Simon in so much trouble a few months back.

Amy’s parents, Steve McDonald and Tracy Barlow, previously convinced their daughter to abort the baby. However, Amy, who’s only 14, had a change of heart.

Last Friday’s Coronation Street scenes showed 17-year-old Tyler trying to force Amy to abort their baby. After his recent troubles with the law, he is worried that getting Amy pregnant would convict him of underage sex.

Amy wants to keep the baby alive, so Tyler pressured her to put the blame on Simon, his mortal enemy. Tyler later harassed Simon and forced him to admit that he is the father of Amy’s baby. He pushed him against the wall and twisted his arm.

TONIGHT at 7.30 & 8.30PM: Seb and Abi go head-to-head for the future of the twins. What will the court decide? #Corrie #Abi #Seb pic.twitter.com/Zaovu5gFAG

Will Simon do what Tyler wanted? He’s been in enough trouble when he let Tyler involve him in several petty crimes, which ultimately landed Tyler to answer the law. Now that he is free again, it is likely that he is going to get revenge against Simon.

Tyler is played by Will Barnett, who was in a recurring role in Coronation Street in 2018. He was last seen on screens in September before the character was sent away for two months. Now, he is back at the cobbles and up to his old antics, and fans of the soap opera could expect him causing more troubles as the soap tackles teenage pregnancy, an important and sensitive topic.

Coronation Street spoilers also reveal that Tyler’s mom, Vicky, will be around again as part of this storyline. Like her son, Vicky can have some tricks under her sleeves. She used to blackmail Simon’s father, Peter, to keep her in the factory if he wants to put a stop to Tyler troubling Simon. She would surely have lots to say about her son’s current situation.