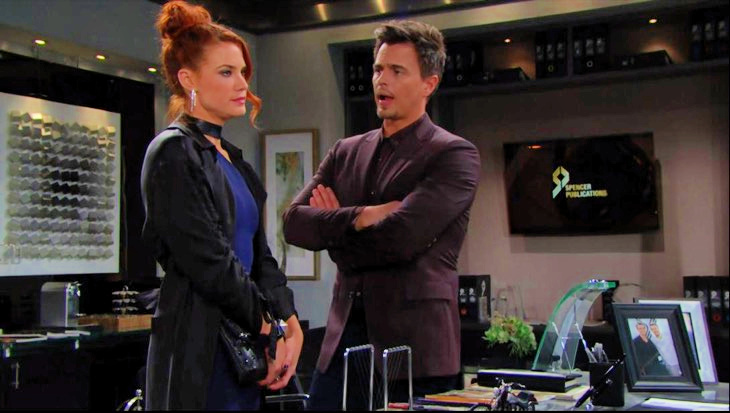 Bold and the Beautiful (B&B) spoilers tease that Thomas Forrester (Matthew Atkinson) will be returning to the CBS soap opera in the next couple days. His return will put some stress on Wyatt Fuller (Darin Brooks) and Sally Spectra’s (Courtney Hope) budding romance. Things have been going very well between them, but Thomas’ return could really change their dynamic. Can Wyatt and Sally survive Thomas’ return?

Wyatt Has Been A Great Partner

As far as boyfriend material, they don’t get much better than Wyatt. He spends time with her, stands up for her to his dad, and they have tons of chemistry. However, does Sally feel the same about him as she did Thomas?

Sally isn’t forthcoming about how she feels about Wyatt. B&B spoilers say that it’s clear she enjoys spending time with him and she wants to be with him. However, is she thinking about marriage with him? That isn’t exactly clear.

They're so cute together 😍 #Wally #BoldandBeautiful pic.twitter.com/9yz7FnYNh7

Wyatt, however, is not shy in telling Sally how much she means to him. As a token of his love, in order to go back and work with his dad, he made Spectra Fashion part of his contract. If that doesn’t say love, I am not sure what does.

Thomas And Sally Were A Great Team

Sally and Thomas were an unstoppable design team. The Bold and the Beautiful spoilers point out that Thomas helped Sally refine her designing skills and really taught her the business. It looked like he was going to ask her to marry him but Bill intervened and pulled Thomas away from Sally.

As B&B fans remember, Bill Spencer (Don Diamont) told Thomas that his son’s mother, Caroline (Linsey Godfrey) was dying of a mysterious disease. Of course, Thomas put everything on hold to spend her “last days” with her and his toddler. As it turns out, it was just a lie.

The spoilers suggest that Thomas found out that Caroline and Bill lied to him to break him and Sally apart. It will be a huge storyline as Thomas confronts Bill about lying.

Do you think Wyatt and Sally can survive Thomas’ return? Let us know what you think by voting below.

Days Of Our Lives Spoilers: Diana’s Deadly Plan Moves Forward, Will She Convince John To Marry Her?