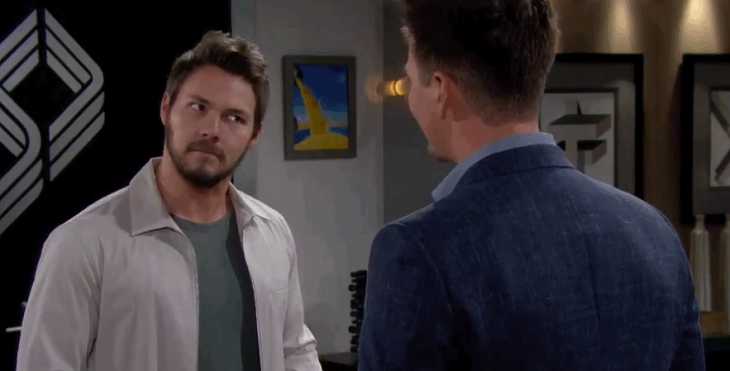 “The Bold and the Beautiful” (BB) recap for Wednesday, April 24, 2019 reveals that over at Spencer Publications, Wyatt Spencer (Darin Brooks) marvels at how difficult things have been for Hope Logan Spencer (Annika Noelle) and Liam Spencer (Scott Clifton).

Liam agrees it’s been hell – it means so much that they have been able to reconnect in a physical sense. Wyatt’s encouraged. Liam thanks his brother for his support. He’s happy to think Hope might be open again to starting a family someday. Talk turns to Liam missing the girls and Steffy Forrester Spencer (Jacqueline Wood). He calls them every day but it’s not the same. Wyatt suggests it’s time to take a trip and assures him he and Sally Spectra (Courtney Hope) will check on Hope.

In the cabin, B&B’s Hope Logan Spencer watches the video of Kelly and says it’s heartbreaking that she misses Liam so much. Thomas Forrester (Matthew Atkinson) thinks it’s clear – Kelly and Phoebe need their dad. He thinks Hope was right about where Liam belongs and asks, “Who needs him most?”

‘Bold And The Beautiful’ Spoilers: Greedy Shauna Pushes Flo To Get Her Hands On Logan Money Before Baby Swap Comes Out

Hope hears Phoebe in the background of the video and sighs…she misses her, she misses them both. Thomas asks her to keep quiet about the video before saying Douglas has come to love her. Thomas says the girls need Liam and Douglas needs Hope. He pushes her to make Liam go to Paris.

Liam arrives and senses Hope is off. She declares he must go be with Kelly and Phoebe; they need him. Hope insists she’s doing better, and Thomas interjects, “I’ll make sure she’s okay.” Liam learns the Forrester jet is heading there and finally agrees to go. Liam encourages Thomas to bring Douglas by and Thomas says she’s in good hands. After, Thomas smirks outside.

B&B’s Sally Spectra arrives at home to find Quinn Forrester (Rena Sofer) there. She announces Sally’s taking a one-way trip out of her son’s life. Sally asks if she’s serious. Quinn recaps that Wyatt Spencer opened her home to her when she was down on her luck – but now she can afford a place of her own. She needs to leave today.

Sally thinks if Wyatt wants her to move, she will go, but it’s not Quinn’s decision. She asks where this is coming from. Quinn doesn’t trust her and suggests Sally stop bleeding Wyatt dry and leave before he kicks her out and maybe find some dignity as well.

Sally doubts Wyatt has any intention on kicking her out then adds if anyone is leaving it will be her. Quinn calls her a con artist and fake who stole from the Forresters. Sally says they’ve forgiven her, and she thought Quinn had too. She has no idea where this is coming from, then realizes Quinn wants Wyatt with Flo Fulton (Katrina Bowden).

Quinn loves that couple but insists this is about Sally. Wyatt arrives. B&B’s Sally declares that his mother is kicking her out of their home. Wyatt goes ballistic – he can’t believe this. Quinn rants about Sally stringing him along and hurting Wyatt with her choices. Wyatt bellows, “Mom, leave!” Quinn goes. Sally asks if it’s true he was hurt. Wyatt doesn’t want to discuss his mother. They embrace. And that’s a wrap.

Don’t forget to check often with Soap Opera Spy for all your soap needs!