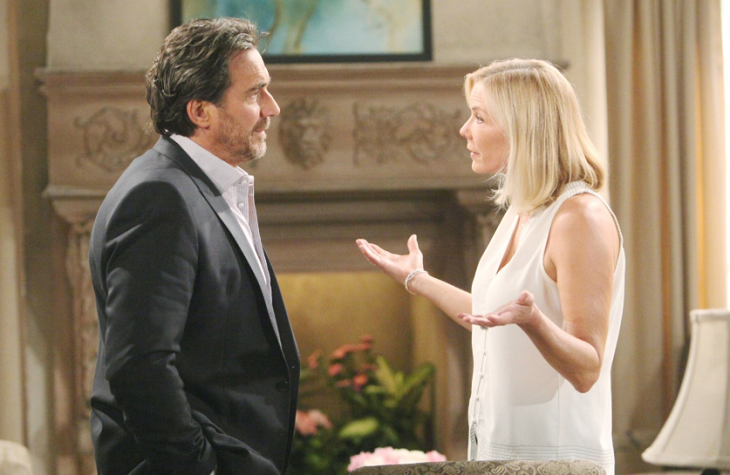 “The Bold and the Beautiful” (BB) recap for Friday, May 24, 2019, reveals that Steffy Forrester Spencer (Jacqueline Wood) emerges from putting the girls to sleep and is surprised to see Liam Spencer’s (Scott Clifton) still at the cliff house.

He just wants to be near his daughter and again reflects on Hope Logan Spencer (Annika Noelle) wanting to end their marriage. Liam blames Thomas Forrester (Matthew Atkinson) and plans to let him know.

At the mansion, B&B’s Brooke Logan Forrester (Katherine Kelly Lang) pleads with Hope Logan Spencer not to break up her marriage and reminds that Phoebe is not Liam Spencer’s daughter. Hope wants to be available for Douglas and it would be easier if Liam went back to Steffy Forrester Spencer. Brooke argues the point. Hope grabs her keys and leaves.

Bold And The Beautiful Spoilers – Hope Logan Not Happy

At Forrester Creations, B&B’s Ridge Forrester (Thorsten Kaye) admits Hope Logan Spencer’s drawn to Douglas and tells Thomas Forrester he gets where he’s coming from. Maybe he, Douglas and Hope would be good for each other, even though she and Liam Spencer are in love. Hope’s simply not happy but Ridge fears Brooke Logan Forrester won’t agree.

After Ridge leaves, Thomas thinks back to spending time with Hope. Liam appears and chastises Thomas for the cheap tactics he used to get to Hope. Thomas is grateful to Hope for being there for Douglas and reminds Liam that Hope wants him with Steffy Forrester Spencer and the girls. Liam congratulates Thomas… Hope’s giving up their marriage. Thomas is happy and proud of Hope for putting the children first and insists Liam’s focus should be with Steffy and the girls – they’re his future. 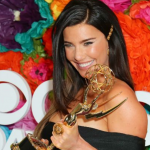 B&B’s Ridge Forrester meets Brooke Logan Forrester at the mansion. She relays Hope Logan Spencer’s ending her marriage and blames Thomas Forrester. He apologizes for Hope’s heartache but Brooke can’t blame Thomas. They’ve been there for each other.

Bold And The Beautiful Spoilers – Brooke Forrester Is Stunned

Brooke believes Thomas has added to Hope’s pain and knows she’ll regret leaving Liam Spencer. She feels for Thomas but can’t allow Hope to become an instant mom for Douglas. Brooke orders Ridge to convince Thomas to prevent Hope from throwing away her marriage. Ridge doesn’t think they should stop Hope. Leaving Liam behind, and the loss of their child might be exactly what she needs. In tears, Brooke is stunned by Ridge’s words.

B&B’s Hope Logan Spencer arrives at the cliff house and welcomes Steffy Forrester Spencer home. Talk turns to Liam Spencer and Hope ending her marriage. Steffy appreciates Hope’s intentions but urges her to stay with Liam – she loves him.

Hope can’t confirm that she has feelings for Thomas Forrester but needs to be a mother to Douglas. It brings her peace. Steffy respects Hope’s decision but it doesn’t mean her and Liam will get back together. When Phoebe cries, Hope longs to see her. Steffy leaves the room and returns with Phoebe.

Bold And The Beautiful Poll: Should Liam Let Hope Go So He Can Be A Full-Time Father? Vote Now! @celebratesoaps https://t.co/xEL6YqtIBB

Hope takes Phoebe in her arms. Steffy can see their connection… Phoebe’s the same age Beth would have been, and Hope’s cousin gave birth to her… Hope jokes about Steffy raising a Logan. She’s so happy to understand the connection she shares with Phoebe and tells the baby how lucky she is to have Steffy raising her. And that’s a wrap. Don’t forget to check often with Soap Opera Spy for all your soap needs.

Days of Our Lives Spoilers & Recap Friday, May 24: Chloe Catches Stefan And Gabi In Bed – Maggie Passes Out