Bold And The Beautiful Spoilers: Hope Shuts Out Liam While Reconnecting With Thomas 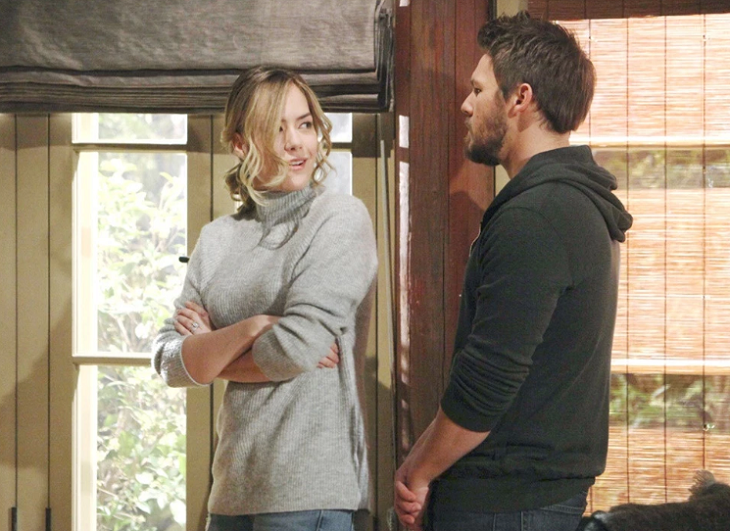 The Bold and the Beautiful spoilers tease that Hope Spencer (Annika Noelle) will finally start to heal from the loss of her daughter. It’s been a rough couple of months for both Hope and Liam Spencer (Scott Clifton). As one might imagine, Hope has had a particularly difficult time dealing with the loss, and while Liam has tried to be there for her, she’s largely shut him out and has been suffering on her own.

But according to B&B spoilers, Hope will soon find some comfort in someone other than Liam. The family has just learned that Caroline Spencer (Linsey Godfrey) has died, and that means that Thomas Forrester (Matthew Atkinson) and his young son Douglas Forrester (Henry Joseph Samiri) are back in Los Angeles. Hope immediately connected with little Douglas, as her motherly instincts kicked in.

But B&B spoilers say that Hope will also start to bond with Thomas as well. He’s been through a terrible loss just as Hope has, and their grief will connect them. It appears that Hope will feel that Thomas understands her grief in a way that Liam does not. She’ll feel comfortable talking with him and in helping him with his grief, she’ll feel a bit better about her own situation.

Bold And The Beautiful Spoilers – Liam Tries To Connect With Hope

And while all of this is going on, Liam still will be desperately trying to connect with his wife. According to B&B spoilers, Liam will come up with an idea regarding their future, and he’ll gently present this idea to Hope, but she’ll turn him down flat. She’ll likely state that she can’t possibly think about the future when she’s currently in so much pain from losing their daughter.

This will likely leave Liam unhappy and frustrated, and the situation will probably get worse when he notices that Hope and Thomas are getting closer. We can’t forget that Hope and Thomas used to be romantically involved, so Liam may start to worry when the two are spending a lot of time together.

And it won’t help that Taylor Hayes (Hunter Tylo) will notice that Hope and Thomas have a special connection. Of course, Taylor is all about Steffy Forrester (Jacqueline MacInnes Wood) getting back together with Liam.

Bold And The Beautiful Spoilers – Taylor Is All About Steam

B&B spoilers say that she’ll be all gung-ho about Hope’s rekindled relationship with Thomas. She’ll probably try to push Thomas to spend as much time with Hope as possible, to make it easier for Steam to get back together.

None of this will be good for Liam and Hope’s marriage. The more time Hope spends with Thomas, the worse the situation will be for “Lope.” The two of them are already on shaky ground. Deep down Hope feels that Liam and Steffy should be together for the sake of Kelly Spencer (Chloe Teperman and Zoe Pennington) and Phoebe Forrester (Isabella de Armas and Redford Prindiville).

So, exactly how close will Hope get to Thomas? Time will tell, but it seems that we’ll be looking at a strong bond forming between these two in the near future. Hope will also form a strong connection with Douglas, which will touch Thomas and likely bring the two closer. Do you think that “Lope” is doomed and we’ll eventually see a Hope and Thomas pairing?

Make sure to stay tuned to CBS “The Bold and the Beautiful” to see how this all unfolds. Don’t forget to check often with Soap Opera Spy for all your latest spoilers, news, updates, and much more.!

Days Of Our Lives Spoilers: Diana’s Days Are Numbered – Will She Be Tied To Marlena’s Attack?