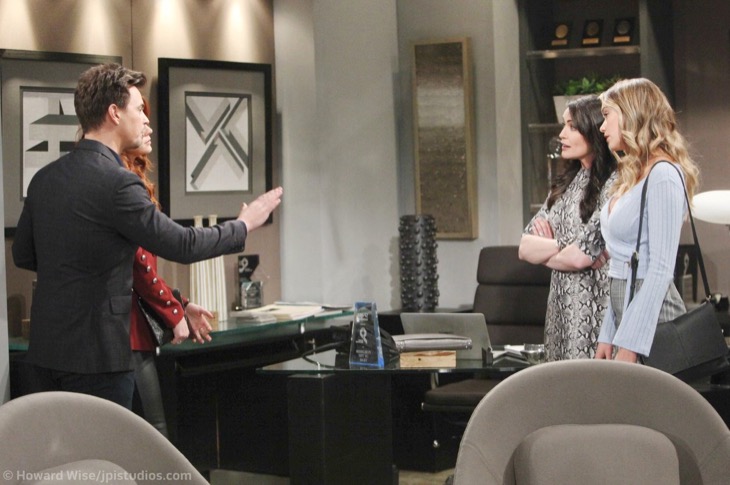 “Bold and the Beautiful” (BB) recap for Thursday, March 28, 2019, reveals that over at Forrester Creations, Eric Forrester (John McCook) confirms to Ridge Forrester (Thorsten Kaye) that asking Sally Spectra (Courtney Hope) to stay was the right thing to do.

Brooke Logan Forrester (Katherine Kelly Lang) doesn’t see how she can refuse. Eric notes it’s not purely a business decision. Ridge thinks Wyatt Spencer (Darin Brooks) will want what’s best for Sally. The trio debate as Ridge complains that Bill Spencer (Don Diamont) doesn’t know how to run a fashion house and will run all over Sally. Brooke protests that he helms one of the world’s foremost fashion magazines. Ridge shrugs it off and says Sally’s better off there with them.

At Spencer Publications, B&B’s Quinn Forrester (Rena Sofer) begrudgingly apologizes to Sally Spectra – she was just excited to see Flo Fulton (Katrina Bowden). Quinn takes Flo out for coffee and Sally muses to Wyatt Spencer that it’s pretty clear who his mother’s favorite is. Wyatt reassures her, but Sally observes that Quinn was never warm and fuzzy. She wrote it off as no one is good enough for her son, but clearly, she was wrong. 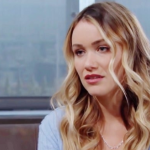 Wyatt asks about the Spencer fashion line. Sally relays there’s something that could change their plans and reveals she’s reconsidering working at Spencer Publications. Sally explains what happened at Forrester Creations and shows him the video of the celebrity who wants to wear her designs in her music video. She says Ridge made her an unbelievable offer, then begs Wyatt to says something.

Wyatt asks, what about their plans and their future together? Sally reiterates she’s grateful to Wyatt, as he protests that Ridge Forrester hates Bill Spencer. Sally isn’t honestly a fan either. They debate. Sally loves Wyatt but doesn’t know if she can pass up this opportunity.

Sally stuns Wyatt when she reveals that she is reconsidering her decision to work at Spencer. WATCH FULL EPISODE: https://t.co/nm5SxoePm4 #BoldandBeautiful pic.twitter.com/R4fqcYcWTH

He admits he is disappointed, as he had visions of them working together, but he can’t tell her not to do this. He warns things will be different with him working at Spencer, but he understands why Ridge wants to keep her. Wyatt believes in her. Sally loves him so much. They kiss with tears in their eyes.

At Il Giardino, B&B’s Flo tells Quinn it’s been good to catch up with Wyatt and to get to know Sally as well. Quinn states they haven’t been together very long, and Wyatt’s never been sweeter than he was when he was with Flo. Talk turns to Flo’s mother. Quinn asks if she is still in marketing. Flo says yes.

Quinn recalls how busy they always were and how much they used to talk about Flo and Wyatt. Flo reflects on the changes in Wyatt’s life. She explains that she never wanted Wyatt to know his father, and Flo relays she still doesn’t know her dad. Quinn wonders if she’s curious and assumed her mother would have told her by now.

They joke about Wyatt’s father turning out to be a billionaire. Quinn thinks Flo’s life could change for the better if she knew who her father was. And that’s a wrap. Don’t forget to check often with Soap Opera Spy for all your soap needs!

Make sure to stay tuned to CBS the Bold and the Beautiful to see how this all unfolds. Don’t forget to check often with Soap Opera Spy for all your latest spoilers, news, updates, and much more!