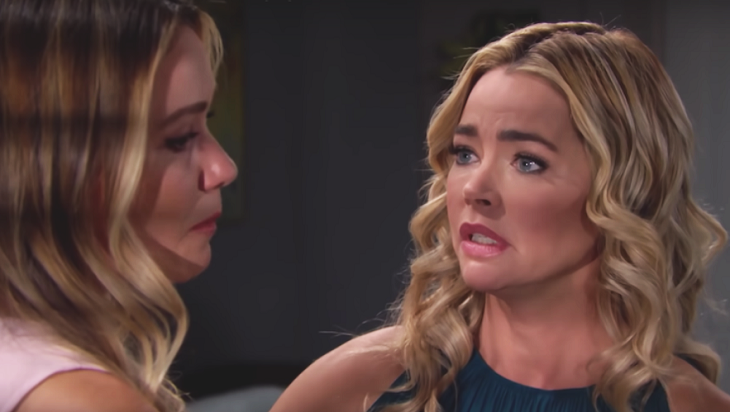 Shauna Fulton (Denise Richards) wants to protect her daughter on ‘The Bold and the Beautiful’. Using a misguided view of morality, she’s encouraging Flo Fulton-Logan (Katrina Bowden) to keep the secret about Phoebe Forrester’s (Isabella de Armas and Redford Prindiville) true identity from Hope Spencer (Annika Noelle). Is Shauna right to do so?

What Zoe Buckingham (Kiara Barnes) and Shauna are attempting to do is as old as time. They are proposing moral relativism as a solution to a problem. B&B is also using a classic daytime staple to craft a compelling storyline that feels likely to play out at least until this summer.

Flo’s mother asked her to consider two scenarios, with the choices centering upon whose feelings would be affected in each outcome. The newly minted Logan family member admonished Shauna, telling her that right is right and wrong is wrong.

Bold And The Beautiful Spoilers: Is Shauna A Threat To Katie And Brooke?

Bold And The Beautiful Spoilers – Arc Can Be Stretched

Yes, it is crazy, along with being fully self-centered, to weigh any consideration purely based on emotional feelings, rather then the crime Reese Buckingham (Wayne Brady) willfully committed and was aided in by Flo.

It was smart to write Shauna into existence, as her maternal connection with Flo makes the ongoing baby secret more digestible to viewers. Zoe wasn’t effectively convincing Flo to stay mum, which meant that Phoebe was likely to be revealed as Beth within weeks. Now, the arc can be stretched for awhile.

Everything Zoe and Shauna have been stressing makes sense. Reese will surely be prosecuted, but so too will Flo because she knowingly posed as Phoebe’s birth mother and still hasn’t told the authorities, or any interested party the truth.

Shauna reinforced that Flo’s conscience will be cleared if she comes forward. That was an attempt to convince Flo she’s being selfish in wanting to tell Hope what happened on Catalina Island. Shauna, like Zoe, is attempting to emotionally manipulate Flo. This makes both ladies not much better than the infamous Dr. Buckingham.

Of course, the Beth-Phoebe secret could drop without Flo’s admission. But this poll question doesn’t ask how the reveal will happen.

Fans of ‘The Bold and the Beautiful’ rightfully express their opinions on a regular basis. So, is Shauna right in telling Flo to remain silent about Phoebe Forrester being Beth Spencer? Please vote in our poll below!

Days Of Our Lives Spoilers: Will And Sonny Get Bad News From Kayla