Bold and Beautiful Rumor: Thorne Feels Pushed Out By Bill, Marriage To Katie Over 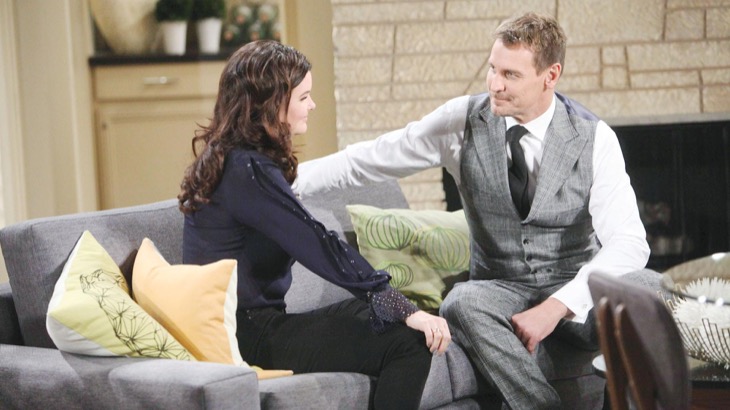 “Bold and the Beautiful” rumors indicate that Katie (Heather Tom) and Thorne’s (Ingo Rademacher) marriage may be over soon. The reason for their impending split is because of Katie’s ex, Bill Spencer (Don Diamont).

However, Bill’s accident made Katie rethink her decision and she began letting Bill spend more time with their son. Katie’s decision upsets Thorne, who feels he’s being pushed out and thinks that Bill doesn’t deserve to be in Will’s life.

Check out those designs! We’re looking back at vintage #BoldandBeautiful fashion from Forrester Creations for #ThrowbackThursday. 👗 pic.twitter.com/1oiOqZfsMX

Seeing Bill spend time with Will and Katie, has Thorne questioning the state of his marriage. Katie and Bill share a son and they’ll always love each other, but it looks like that love is about to be rekindled.

Feeling that he’s no longer needed, Thorne will make the decision to end his marriage to Katie and let her be happy with Bill.

B&B fans expected that Katie and Thorne’s marriage wouldn’t last long, especially after it was revealed Ingo Rademacher was leaving the show. Since there’s no news about a recast, its obvious Throne’s run with the show has come to an end.

Look at how Katie is looking at Bill.. Thorne who? #Batie #Boldandbeautiful pic.twitter.com/aqKCjgAaHi

Thorne has always been a fan favorite with the show. Viewers loved him because he was treated as second best by his parents and many felt with his disappointment at always being thrown over in favor of Ridge (Thorsten Kaye).

Since his return, Thorne has once again taken a backseat to the other characters on the show. It looked like he was going to rekindle his relationship with Brooke (Katherine Kelly Lang), but she reunited with Ridge. Thorne’s romance with Katie showed promise, but they weren’t given enough time to develop their relationship.

Since his marriage is over, there’s no use for Thorne to stay in Los Angeles. He’ll go back to Paris and fans will wonder when and if they’ll ever see the character again.