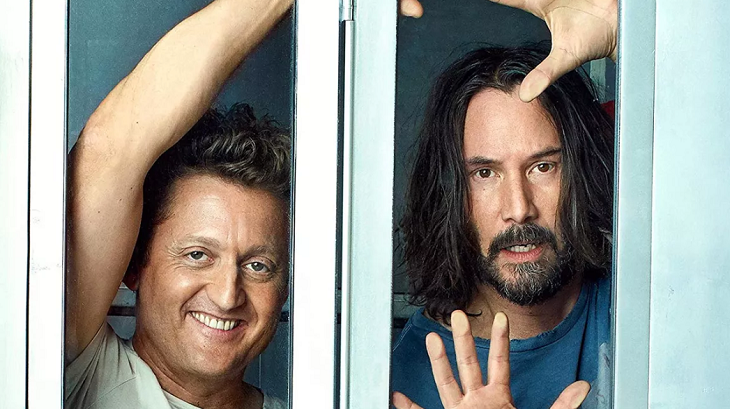 We’ve got good news for Bill and Ted fans! There are new reports that say a third Bill & Ted movie is on the way! Bill & Ted is an American comedy film series featuring William “Bill” S. Preston Esq. and Theodore “Ted” Logan.

The films, which have been hailed as the biggest cult classics of our time, star actors Alex Winer and Keanu Reeves. And yes, both actors who will return, said: “We want to say thank you to you the fans because it looks like we might, actually, hopefully, make a movie this summer.”

The first Bill & Ted film was released in 1989 and made $30 million at the box office. The second film in the series, Bill & Ted’s Bogus Journey, was released almost 30 years ago in 1991. Dean Parisot will direct the much-anticipated third film.

The script was written by Chris Matheson and Ed Solomon, who wrote the two previous Bill & Ted films. Steven Soderbergh is the project’s executive producer.

The world is about to get a lot more excellent. Watch this special announcement from your two favorite dudes! 8.21.20 🎸⚡️ pic.twitter.com/miOtBhinlC

So far, producers for the project have not made any additional comments. Tell us, are you excited to see Bill and Ted back in action on the big screen?

It’s without a doubt that many fans are going to be feeling very nostalgic about the movie in the coming months as more and more details are made public about the film. We will be updating you with all of the latest news right here.

Bill & Ted 3: Face the Music is currently due to hit theaters on August 21st, 2020. The summer of 2020 is already looking to be pretty gnarly, folks. The movie will be filmed in New Orleans this summer.

In the meantime, drop us a line with your thoughts in our comments section below. And as always, come back to Hollywood Hiccups for all the latest news, updates and spoilers on your favorite daytime and primetime television shows right here!

Young And The Restless Spoilers: Thad Luckinbill Teases J.T.’s End And His Future At Y&R