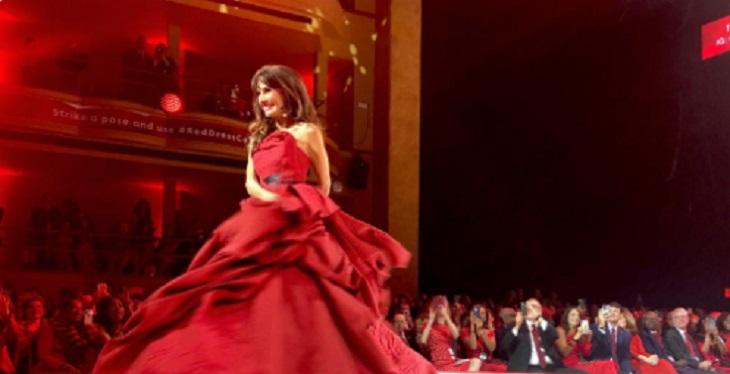 Susan Lucci has always been one of the most elegant stars of daytime television, but even she suffers embarrassing mishaps once in a while! The former All My Children star, who is best known for her role as Erica Kane, took a tumble while walking the runway for the American Heart Association show in New York City earlier this week.

New footage shows the 72-year-old All My Children legend taking a misstep and then falling on the runway before managing to get up again. Of course, she did it all with the utmost grace. Despite the blunder, Susan Lucci received a standing ovation from the audience before continuing her way down the runway.

Earlier this month, the brunette beauty admitted that she almost had a heart attack back in October. Her near fatal health share is one of the reasons why she’s decided to work with the American Heart Association.

Susan wrote, “On a late October afternoon, I had a wakeup call. Narrowly missing a severe heart attack, I realized how vulnerable life is and how incredibly grateful I am to be here today.” She went on to explain, “I exercise daily, eat as healthy as possible and yet had a shock of a lifetime when I was told that I had a 90% blockage in the main artery of my heart. I learned that heart disease is the number 1 killer of women, claiming more precious lives every year than all forms of cancer combined.”

Do You Miss Susan Lucci On All My Children?

And while Susan Lucci might no longer be in front of the cameras, it’s great to see her looking both fit and fabulous during her public appearances. We have a feeling that we will be seeing much more of Susan this year!

In the meantime, let us know what you think by leaving us a line with your thoughts in our comments section below. And as always, come back to Soap Opera Spy for all the latest news and updates on all of your favorite daytime television shows right here!

Days of Our Lives Spoilers: Rafe Threatens Ted – Stay Away From Hope!