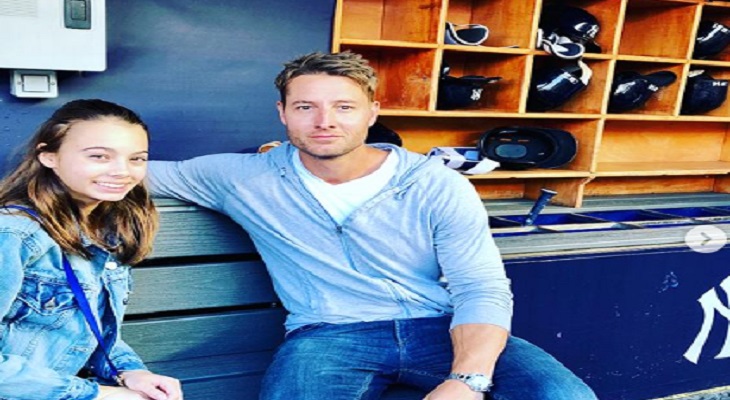 It looks like this celebrity kid and cutie might not be following in her famous father’s footsteps after all. At least, not right away. This is Us star Justin Hartley says that his 14-year-old daughter Isabella is being forced to turn down acting agents.

Apparently, they all want her to be the next big star in Hollywood but according to her famous father, she’s just not ready to dip her toes in the entertainment industry just yet.

Speaking to Ellen DeGeneres on her daytime television show, the handsome actor says that while all of the attention has been flattering, it’s also been a bit on the overwhelming side, too. “She came to the This Is Us premiere with me and my whole cast was there. It was really nice,” he said.

“My agent came as well — lovely man — and was talking to her. He comes up to me afterward and he goes, ‘Listen, I just want you to know, [I] straight-up offered your daughter representation because she’s got such a great personality, I think she’d be wonderful in this business.’”

I’m so lucky. I got to spend an amazing week in NY with my favorite child, @bellajustice_hartley. Thanks to @tiffanyandco #blueboxcafe @yankees #topoftherock @klgandhoda @todayshow

Luckily, Justin adds that should Isabella want to become an actress, at least they know that that she will have no problem breaking into the industry. After all, her phone is already ringing off the hook

!“She was like, ‘Yeah, um, well, there are a few things that I’m interested in. I’m not quite sure if I want to go down that road,’” Hartley revealed.

“It took me years to get anyone to pay attention to me! But whatever, good for her. She’s too cool for school, man.”

In the meantime, we will definitely be on the lookout. There’s always the possibility that Isabella might have a guest role on This is Us alongside her father! Also, don’t forget to check back with Soap Opera Spy for all the latest news, updates and spoilers on This is Us and all of your favorite primetime shows right here.