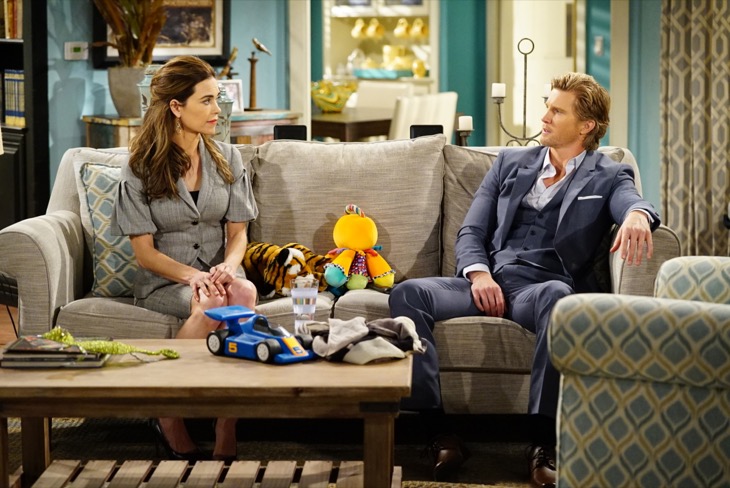 Vickie’s (Amelia Heinle) gut instinct is telling her to be cautious on ‘The Young and the Restless’. She can’t rush into a remarriage with J.T. (Thad Luckinbill) considering the recent attack and what Mack (Kelly Kruger) just revealed.

Emotional abuse is the term that’s been written into the script. So that appears to mean that J.T. didn’t do to Mack what he just did to Victoria. Kruger’s character implied that she’d experienced a change in her husband during their marriage and that it related to non-physical abuse unless Mackenzie simply didn’t feel comfortable discussing other details.

During a recent verbal brawl, where J.T. and Vickie began slapping at each other, Mr. Hellstrom grabbed his supposed love by the neck, shoved her against the living room closet and then put his fist into the door, which was mere inches aside of Vickie’s head. That scary scenario raised an important social issue. It also made Y&R viewers wonder what had become of J.T. since he was last seen in Genoa City in 2010.

The initial incarnation of J.T. was a good guy. Like many GC characters, he had his ups and downs. But he never injected violence into ‘JTV’s’ past relationship. This time he has.

This on-again couple made up the same day that they had their fight and then agreed to remarry. However, Billy (Jason Thompson) urged Mack to tell Vickie about her own experience. That factor weighed on Vickie’s mind and thankfully caused her to delay wedding plans.

In so doing, Vickie may have saved her life and those of her three children’s. But considering the direction Luckinbill’s character has been written into, all fans are right to question when not if, J.T. will be arrested for his attack on Victor (Eric Braeden), which only Luckinbill’s character knows about right now? Viewers also might be wondering if J.T.’s heart issues might cause him to die, or be killed during a further outburst.

Daytime fans know that they are witnessing great soap. Kudos to Y&R for delivering a well-crafted and acted arc.

The Bold and the Beautiful Spoilers: Sheila’s Not Going Anywhere For Now, Staying on B&B!