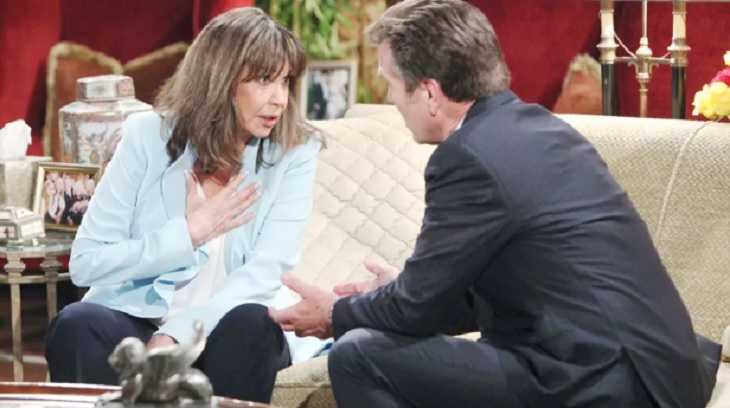 Jill (Jess Walton) did not return to Genoa City with the intention of helping Jack (Peter Bergman) on ‘The Young and the Restless’. Instead, she’s defending the honor of her one true, fabled love, Phillip Chancellor II (Donnelly Rhodes). However, the pairing of a decade’s old arc with this current storyline will likely allow Walton’s great character to prove helpful to Jack anyhow.

Jack bought Dina’s (Marla Adams) story. Earlier this year she revealed to Abby (Melissa Ordway) that John (Jerry Douglas) was not Jack’s biological father. That mega-information drop seemed outlandish and was followed by a cryptic black and white group photo that included Phillip, which Dina later pointed out as being Jack’s real father.

Cane (Daniel Goddard) was outraged when asked if he would help in exhuming Phillip’s body, which has been located in the back of the Chancellor estate since 1975, the year Rhodes’ character died. Mr. Ashby rightly felt threatened, as a confirmed biological tie between Jack and Phillip could impact the power structure at Chancellor Industries. Fans recall that Jill is allowing Cane to head that company.

Katherine’s (Jeanne Cooper) memory is surely being evoked through this particular steamer, which is noted by long-tenured Y&R fans. She, along with Jill, would fiercely oppose any attempt to unearth the man she also loved.

Newer viewers may not know the circumstances surrounding Phillip’s tragic demise. Katherine drove a car she was transporting her then ex-husband in off a cliff, which caused him to suffer injuries that proved fatal shortly thereafter. Phillip had returned to Genoa City after obtaining a divorce from Katherine in the Dominican Republic.

Jill was pregnant with Phillip’s child at the time. Phillip refused an inebriated Katherine’s remarriage pleas, she became enraged, and then veered her vehicle intending both characters deaths.

Forty-three years later a reach back to one of Y&R’s most infamous storylines is being revisited. Jill, specifically, possesses information about that era that no one else has. While he’ll face initial resistance, Jack will find that Jill is helpful in his paternity search that is currently linked to Phillip Chancellor II.