The Young and the Restless Weekly Spoilers January 22 to 26: Hasty Decisions, Prying Friends, and Tough Choices 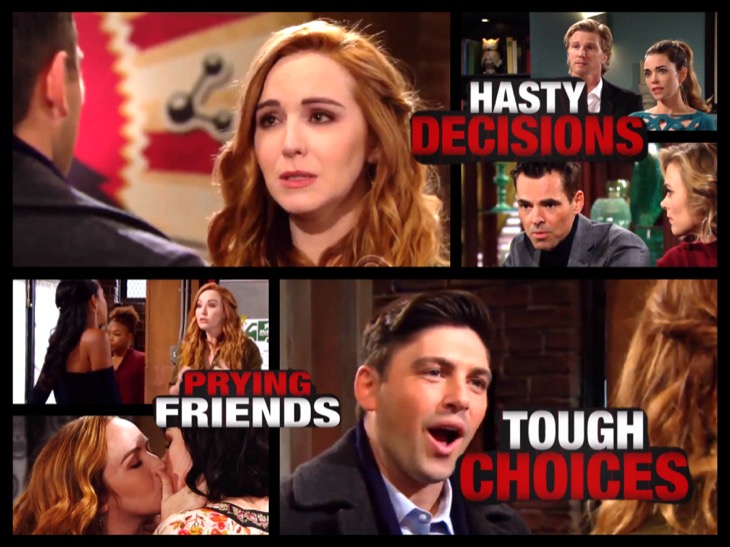 “The Young and the Restless” (YR) spoilers for the week of Monday, January 22nd through Friday, January 26th tease that “It’s a whirlwind week full of hasty decisions, prying friends, and tough choices.” It’s going to be one hell of a week, so make sure you do not miss a moment of the action!

In the newest CBS “The Young and the Restless” video promo we see Victor (Eric Braeden) and Nikki Newman (Melody Thomas Scott) at their daughter’s place and they are taken by surprise once they learn that J.T. Hellstrom (Thad Luckinbill) has moved in. They will not be the only ones in shock by the news, Billy Abbott (Jason Thompson) will be as well. Victoria will accuse him of being jealous. Do you Y&R fans think she is right that he is jealous or could he be genuinely concerned for her?

Elsewhere, Mariah Copeland (Camryn Grimes) will be distraught after she recently learned that Tessa Porter (Cait Fairbanks) stole her thoughts from her journal and wrote a song with them. Mariah will demand that Hilary Curtis (Mishael Morgan) pull the show and if not she will sue her. She will also try to talk to Devon Hamilton (Bryton James) about removing the song in which it appears that he is taking Tessa’s side and so will her brother Noah Newman (Robert Adamson) until she gives him her journal to read. She is all in at this point and is ready for the fallout. How do you think Noah will react after learning the truth?

Meanwhile, Jack (Peter Bergman) and Ashley Abbott (Eileen Davidson) will continue to fight over the CEO position at Jabot. Jack hopes to be able to block Ashley with the “blood” clause. The arbitrator’s ruling forces someone to make a shocking decision. Ashley will be presented with a shocking offer. Rumor has it that Victor Newman will offer her a job. Would you Y&R fans like to see that happen?

Other “Young and Restless” spoilers suggest that Phyllis Abbott (Gina Tognoni) will try to play matchmaker with Hilary Curtis and Ravi Shapur (Abhi Sinha). Do you think they would make a good couple? Also this week, Lily Ashby (Christel Khalil) will have trouble bonding with baby Sam and Cane Ashby (Daniel Goddard) will catch her in a lie. So as you can see we have a pretty exciting week heading our way so make sure to stay tuned CBS’s “The Young and the Restless!”