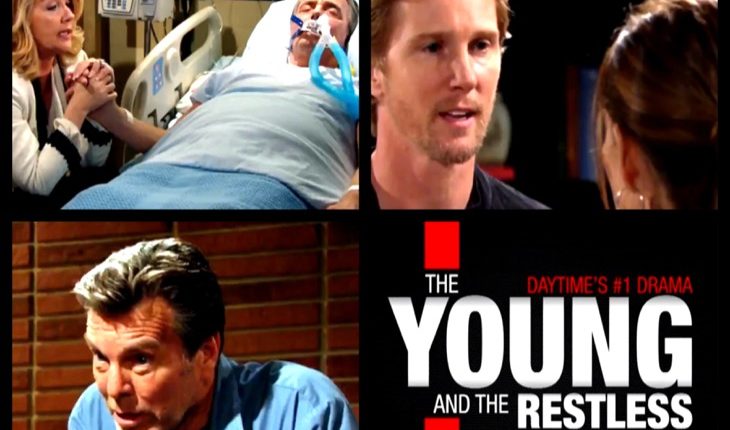 “The Young and the Restless” spoilers for Tuesday, April 3, tease that Jack (Peter Bergman) will have a terrible dream. In jail, Jack’s nightmare involves Kyle (Michael Mealor) being announced as Victor’s (Eric Braeden) business partner. The chaos continues when Jack bickers with Victor and ultimately shoots him. Jack wakes up in a panic, so Kyle’s return definitely has him on edge.

At Jabot, Ashley (Eileen Davidson) finds Kyle in Jack’s office. He reveals that he’s taking over and assures Ashley that he’s serious about this. Over with Victoria (Amelia Heinle), she tells J.T. (Thad Luckinbell) that she has some concerns and can’t rush into this marriage. J.T. feels like this is Mac’s (Kelly Kruger) fault, but Victoria dismisses the idea. She believes this is about their own romance.

J.T. tracks Mac down later and calls her out on turning Victoria against him. When Mac tries to walk away, J.T. reaches out to stop her. Mac gets upset as J.T. grabs her arm. He rants about how she portrayed him as a monster, but she suggests he simply did monstrous things. J.T. contends that he can make changes and fix his renewed relationship with Victoria.

At the hospital, comatose Victor’s thoughts can be heard. He’s thinking about how much Nikki (Melody Thomas Scott) means to him. At Nick’s (Joshua Morrow) urging, Nikki takes a break from all the medical drama. She ends up in the jail visiting room and asks Jack about Victor’s assault. Jack insists that he didn’t shove Victor, but he’d like to know who’s responsible.

Meanwhile, J.T. makes his way over to Victor’s room. He stares at his victim until Victoria interrupts. After they step out, J.T. apologizes for how he’s treated her. He vows to stop being so judgmental, but Victoria still wants to make a counseling appointment.

Back with Nikki, she’s distraught to learn Victor has sepsis. His condition is declining rapidly. At Hamilton Winters, Lily (Christel Khalil) is forced to hear all about how Hilary (Mishael Morgan) made love with Devon (Bryton James). She confronts Devon, but insists she’s giving up this fight.

Nevertheless, Lily can never resist a little meddling! When Simone (Shanica Knowles) arrives later, Lily pushes to have her around more at the company. She obviously wants keep Devon distracted and Hilary frustrated.

Kyle Catches up with Mariah

At the TV studio, Mariah’s (Camryn Grimes) surprised to see Kyle (Michael Mealor). She expresses concern about Summer possibly returning as well. Kyle hasn’t heard anything about that, but he’s pleased to see Mariah. They catch up, but Kyle seems uncomfortable when Mariah mentions Jack.

Back in Jack’s office, Kyle sits down at Jack’s desk and puts his feet up. He’s already making himself quite comfortable. When Ashley visits Jack, she breaks the news that Kyle’s running the show at Jabot. Jack freaks and declares that Ashley has to stop this. He’s worried about the plot Victor and Kyle were working on.

It sounds like the action’s heating up on “The Young and the Restless.” We’ll give you updates as other Y&R details and rumors emerge. Stay tuned to see what’s ahead on the CBS soap.