The Young and the Restless Spoilers: October Brings Big Shocks And Major Drama!

Drama is always in order on ‘The Young and the Restless’. Hey, it’s a soap opera. All devoted fans know that sunshine, roses, and lollipops are not regular parts of Genoa City’s scenery.

Sharon (Sharon Case) is currently devastated. Even though the person (Phyllis) she pushed down the stairs four years ago changed faces, morphing from Michelle Stafford to Gina Tognoni, the base of this character is being revisited.

As Mariah (Camryn Grimes) has just revealed, ‘Phick’ got back together weeks ago. Actually, it was a bit longer than that, but soap time is often skewed.

No matter, after Nick (Joshua Morrow) is shocked by the reveal and explains himself all will work out. Yes, Sharon will overcome yet another Phyllis-related betrayal and finally say, “I do.”

And then there is Jack Abbott (Peter Bergman). Yes, use of that last name is right.

The once, the now, the always son of John Abbott (Jerry Douglas) will confirm, beyond the shadow of a plot doubt that’s been stretched since the spring, that he is who he always thought he was, an Abbott. 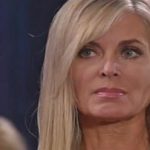 Of course, Jack’s win will also mean that at least one of his siblings will learn that John was never her, or his father. If it’s Traci, then Dina also wouldn’t be her mother. If it’s Billy, then Jill (Jess Walton) cavorted. In any regard, Jack will reclaim the Jabot throne.

Sometimes, just when it looks like all is lost, victory is still secured. That’s what appears to project this October on Y&R.