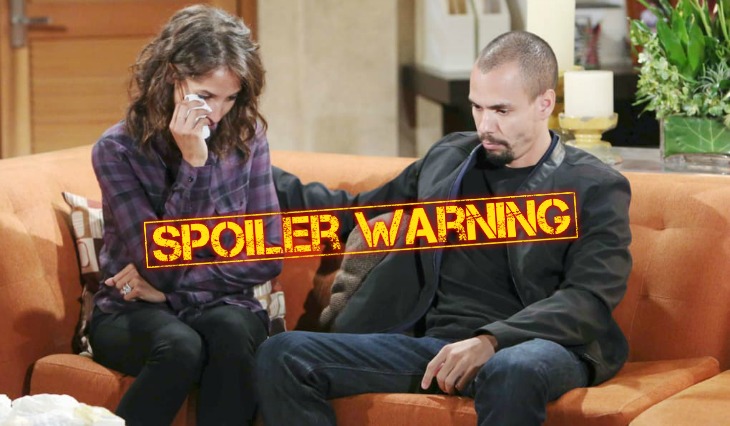 “The Young and the Restless” spoilers for Friday, July 27, tease that Hilary’s (Mishael Morgan) death will draw near. In the ICU, Devon (Bryton James) tries to stay upbeat. He mentions plans for their future together, but Hilary thinks it’s time to face reality. They have some things to go over before she fades away.

Hilary brings up Shauna (Camryn Hamm), who Devon promises to watch out for. Talk turns to their love story and how much they care about each other. After some bittersweet “Hevon” flashbacks, Hilary ultimately passes away in Devon’s arms. He clutches her tightly and cries over this devastating loss.

Cheers to Hilary & Devon! Thanks for the beautiful #hevon glasses from all those years ago fans. In the end, they made the perfect toast with my onscreen husband for the second time! Although it is bittersweet, I hope you enjoy our wedding. #HevonWedding #YR #AfterMyFinalScene pic.twitter.com/WgOvuiyTKC

At home, Mariah (Camryn Grimes) packs up for her trip with Tessa (Cait Fairbanks) and takes one last look around. When Nick (Joshua Morrow) arrives, Mariah puts her bags out of sight and tells him about the hospital wedding. They share a sweet moment as Nick comforts Mariah. He lets her know that she’s a crucial part of the family.

At Crimson Lights, Sharon (Sharon Case) speaks with Tessa briefly. Tessa wants Sharon to understand that she’s committed to Mariah and won’t hurt her. Later, Sharon returns to the cottage in a good mood. She offers praise regarding Tessa’s attitude before heading upstairs.

Mariah exits and gets in Tessa’s car, but it soon becomes clear that she isn’t leaving. She just can’t walk away from her life in Genoa City. Tessa understands and hopes Mariah can give her heart to somebody else eventually. They lean in for a kiss through their tears.

Meanwhile, Victor (Eric Braeden) and Victoria (Amelia Heinle) have an important pitch to make. They encourage Nikki (Melody Thomas Scott) to take a position at Newman Enterprises, but she’s a tad reluctant. Nikki doesn’t like the idea of making the tension with Nick worse, but she gets on board anyway.

Nick overhears Nikki sign on for a Newman job and looks miffed. He later gets into an altercation with Billy (Jason Thompson). After Nick suggests he might go after Fenmore’s, he criticizes Billy for gambling again. Billy makes it clear that Nick is just like Victor. They ultimately can’t hold themselves back any longer, so they come to blows.

As the brawl winds down, Nick gives Billy a stern warning. He feels like Billy will regret it if he makes him an enemy. Nick’s not messing around! “The Young and the Restless” spoilers say plenty of wars are looming in GC. We’ll give you updates as other Y&R news and rumors emerge. Stay tuned to see what’s ahead on the CBS soap.