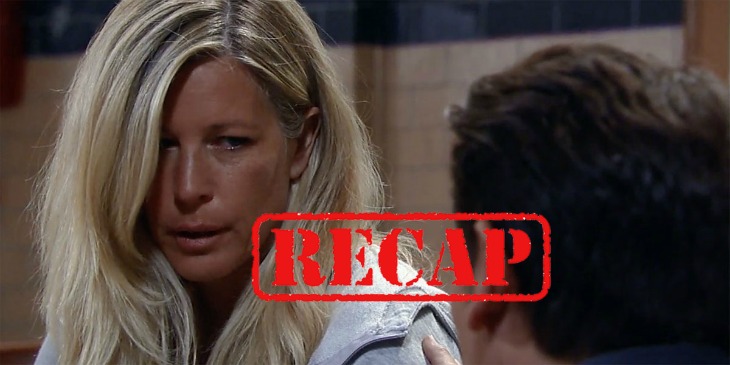 Brad Heads Home With The Baby

Alexis just found out about the baby. Alexis says the baby will be there in 20 minutes. Alexis tells Brad to get ready to take his son home. Brad tells Julian about the nursery. Alexis brings the baby to Brad and Julian. Brad holds the baby for the first time. Julian records the moment for him. Brad talks to the baby about Lucas (Ryan Carnes). Brad is afraid of breaking the baby.

Who’s ready to meet Brad and Lucas’ baby! Grandpa Julian sure is. Let that sink in for a minute. #GH is BRAND-NEW and STARTS NOW on ABC! #GH55 pic.twitter.com/Mq20vJYGP2

Julian assures Brad he has plenty of support. Brad and Julian wonder about the chances of losing the baby. Alexis tells Julian she has this under control. Brad offers to let Julian hold the baby. Brad takes the baby home. Julian tells Alexis he wonders when he can hold him again.

General Hospital’s Jordan (Vinessa Antoine) tells Chase (Josh Swickard) she wants this locked down so Michael (Chad Duell) doesn’t get hurt. Chase plays the recording to Jordan. Chase tells Jordan Michael wants a confession out of Nelle (Chloe Lanier) first. Chase tells Nelle Michael’s car is rigged to crash. Nelle tells Chase she will have Michael drop her off and send him away. Nelle tells Chase Michael has to die.

Ava goes to the Quartermaine’s to see Michael. Ava tells Michael Carly is talking about her as Nelle’s accomplice. Michael tells Ava she needs to be worried about Carly, not him. Ava gives Nelle her final paycheck and leave. Nelle tells Michael she ran into Chase. Chase still wants a reunion Nelle says. Michael threatens to call Jordan. Nelle tells Michael Chase knows she’s with him “until death do us part”. Michael offers to pick up the lollipops for her bag. Nelle thinks the car will mess up a few minutes into a trip. Nelle asks Michael to take her to GH on his way. Michael agrees and they leave.

Kevin’s got some explaining to do, West Coast. What power does he still have to help Carly? An all-new #GH starts RIGHT NOW on ABC! #GH55 pic.twitter.com/Tc768oV5o7

General Hospital’s Kevin walks into Sonny’s living room with Kevin. Sonny wants to know how they can get Carly home. Kevin doesn’t blame Carly but he thought she was in good hands. Kevin tells Sonny it might not be possible to get Carly out now. Kevin tells Sonny Carly’s escape has hurt her chances of release. Sonny tells Kevin that Diane (Carolyn Hennesy) cannot even see Carly. Kevin says Carly can be reassigned to another doctor.

General Hospital’s Sonny goes to Jordan for help. Jordan says they are only away from Carly while she gets treatment. Sonny argues that Carly doesn’t need treatment. Jordan tells Sonny they can’t do anything until Michael gets the confession. Chase tells Jordan and Sonny that will happen tonight.