The Young and the Restless RECAP Tuesday, July 10: Sharon And Girls Panic – Billy And Summer Scheme 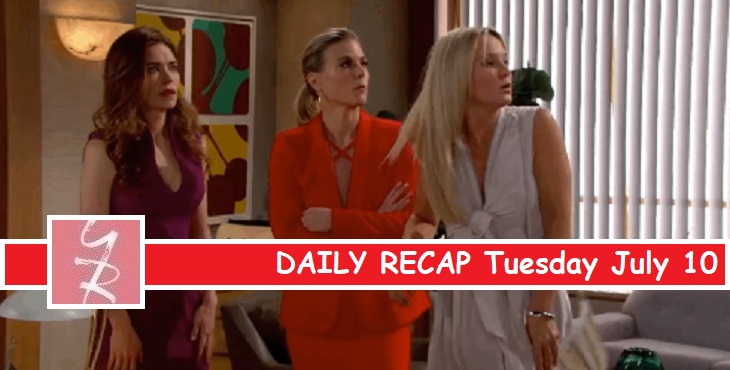 “The Young and the Restless” (YR) recap for Tuesday, July 10, 2018 reveals that over at Jabot, Summer Newman (Hunter King) notices Billy Abbott (Jason Thompson) staring at a photo of Jaboat.

Ashley Suspicious Of Summer And Billy

Billy reveals he is planning on winning it back tonight. Ashley Abbott (Eileen Davidson) arrives and wants details on everything from budget to the boat. She dismisses Summer and wonders why she is there. Billy brings up the open door policy he put in place. Ashley let’s him know she has some ideas of her own.

Billy points out to her that she is COO, not CEO. Out in the hall, Ashley asks Summer to submit a summary by the end of the day telling exactly what she does there.

Sharon Fills Phyllis In On J.T.

At Sharon McAvoy’s (Sharon Case) place, Phyllis Summers (Gina Tognoni) arrives. She and Phyllis chat about the bombshell she left on her voice mail about J.T. Hellstrom (Thad Luckinbill). Sharon fills her in on seeing J.T. outside. Phyllis questions if she was drinking. They both get a text.

At the penthouse, Neil Winters (Kristoff St. John) is too busy to have coffee with Nate Hastings (Brooks Darnell). Nate says he can not meet with Victor Newman (Eric Braeden) until tonight. Nate is concerned about both Victor and Neil.

Over at the Abbott mansion, Jack Abbott (Peter Bergman) rants about not being able to use the bone fragment Kyle Abbott (Michael Mealor) took. He points out it was obtained illegally. The doorbell rings and it’s Cane Ashby (Daniel Goddard).

Cane is upset about Kyle’s disrespect. Kyle reminds him of his own disrespect towards the Chancellors. Cane warns them that they will not be able to get their hands on Chancellor Industries even if proven to be Chancellors since Katherine Chancellor (Jeanne Cooper) left it to Victor Newman who then sold it. Jack brings up Katherine not being aware that he would of been the rightful heir if he’s a Chancellor. Cane points out he has no proof.

At Newman Enterprises, Victoria Newman (Amelia Heinle), Phyllis Summers, and Sharon McAvoy, chat about the J.T. Hellstrom sighting. Phyllis is still not buying it and Sharon says they have to quit living in denial.

Nick Newman (Joshua Morrow) arrives and finds it odd they are all together again. Sharon and Phyllis say they are there to support Victoria. Phyllis leaves. Nick assures Victoria that they will find J.T. and he will pay. Talks turns to the damage being done to the company. Then Nick gets a call from Brittany Hodges (Lauren Woodland) letting him know by the end of the day they will be a final ruling concerning Christian.

Neil Gets A Tip From Ashley

At the Dive Bar, Ashley Abbott and Neil Winters meet up. She tells him she is back at Jabot.They toast to her being home. Jack Abbott joins them and Ashley let’s him know he is always welcome to come back to Jabot. Jack excuses himself.

Neil and Ashley then chat about how she got Billy Abbott to let her come back and the methods she used. Ashley let’s Neil in on a company that is about to cut ties with Newman Enterprises and says it will be a fit for Hamilton-Winters Group. Down in the dining room, Jack Abbott let’s Kyle Abbott know he decided to run the DNA test on the bone fragment he found. He wants to know who he is.

At Crimson Lights, Nate Hastings runs into Cane Ashby. They chat about what Nate is going through. Nate admits he struggled after losing his fiancée and in Boston he has too many painful memories.

Phyllis Summers arrives at Jabot and Summer Newman fills her in on Ashley Abbott’s behavior towards her. Phyllis tells Summer to watch her back and asks to look into a missing shipment. She points out Billy Abbott had a shipping issue a few nights ago.

Summer does as asked and let’s Billy Abbott know the shipping company acted like she was nuts. He explains why he said that. Phyllis appears and Billy insists the company is not reliable.

After Phyllis leaves Billy tells Summer he has to win back the yacht. She agrees. And that’s a wrap. Don’t forget to check often with Soap Opera Spy for all your soap needs.

The Bold and the Beautiful Recap Tuesday, July 10: Xander’s Got A Stalker And A Secret Past