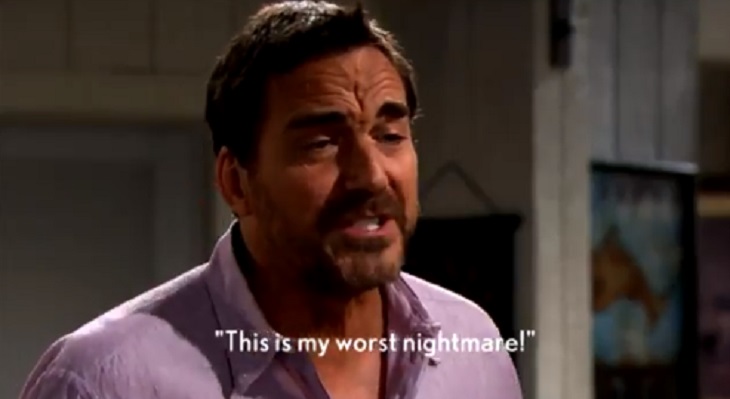 “The Bold and the Beautiful” recap for Monday, July 30, 2018, reveals that over at the beach house, Liam Spencer (Scott Clifton) flashes back to what Bill Spencer (Don Diamont) and Steffy Forrester (Jacqueline Wood) just said to him.

Hope Logan (Annika Noelle) arrives. Liam fills Hope in on how things went down with Steffy. He tells her that Steffy ran straight to his father and how she had Bill’s sword necklace on.

Hope tells Liam that she and he have loved each other for years and what happened between them came from a moment of them being deeply connected. Liam tells Hope that Bill and Steffy are getting married. She is shocked.

Liam is shocked by the way Bill was lecturing him. He then talks about how Steffy walked over to Bill and made a united front. Liam feels that he is free of the shadow of Bill and Steffy because of Hope. Liam then says he has to let go. Hope let’s Liam know she is there and he is not alone.

At the cliff house, Ridge Forrester (Thorsten Kaye) chats with Steffy Forrester Spencer. He assumes she is alone. Ridge tells Steffy what Wyatt Spencer (Darin Brooks) recently told him. Steffy turns around so that he sees the sword necklace she is wearing.

Ridge knows Steffy is hurting but wants her to rethink things. Steffy flashes back to finding Liam Spencer with Hope Logan. Steffy points out how things were all just a fairy tale and then tells Ridge she is marrying Bill Spencer.

Ridge demands she take off the necklace and tells her she is not marrying Spencer. Steffy says she is not playing games anymore and that Liam can have Hope. Ridge points out that she is selling her soul to the devil.

Steffy then adds she and Bill made a deal and fills him in on her getting his 12.5% of Forrester Creations shares. Ridge does not care about the shares. Ridge wants to know what happened to his clear right capable daughter.

Steffy tells Ridge it is over with Liam and she has made up her mind. Steffy then adds she knows he doesn’t approve but she has to do what is right for her. Ridge is upset that she is broken.

Bill Rushes His Wedding to Steffy

Over at Bill Spencer’s place, Wyatt Spencer and Justin Barber (Aaron D. Spears) arrives. Wyatt and Justin are upset with what Bill is doing. Bill tells them he wants to start planning his wedding to Steffy Forrester Spencer right away. Justin thinks he is moving to fast.

Wyatt agrees. Bill wants to make the wedding happen fast. Wyatt says he is going to sit this one out. He then points out how it is going to doom his relationship with Liam Spencer. Bill says he knows he is right about Liam, but it is not going to stop him from marrying Steffy.

Bill asks Wyatt if he is sure he doesn’t want to be at their wedding. Wyatt says he has to stay neutral on the matter. Bill tells him he is going to seal the deal as soon as he can. Justin asks him if he is afraid Steffy will back out. And that’s a wrap. Don’t forget to check often with Soap Opera Spy for all your soap needs.