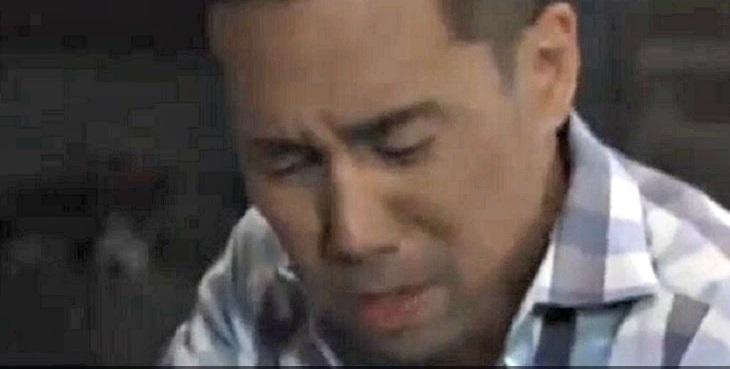 “General Hospital” spoilers for Tuesday, July 31, tease that Finn (Michael Easton) and Robert (Tristan Rogers) will consider Anna’s (Finola Hughes) dilemma. Since Anna never made it to Berkley, they’ll determine that she’s being held against her will. Finn received some texts from Anna’s number, but the captor obviously sent those. That means Finn hasn’t been in touch with her for quite some time.

Finn will want to track Anna down ASAP, but Robert will think he can take it from here. They’ll debate the issue, but Robert will ultimately cave in. He’ll agree to let Finn pitch in on this mission, but he’ll definitely be bossy about their next move. At GH, Lucas (Ryan Carnes) will be thrilled over his new baby boy. He’ll learn he’s a father, so that’ll fill his heart with pure bliss.

Unfortunately, a disaster’s playing out back at home. Brad (Parry Shen) realized Wiley wasn’t breathing, so he’ll have to do CPR in Tuesday’s episode. “General Hospital” spoilers say Brad will plead with Wiley to pull through, but he probably won’t get his wish. This is shaping up to be a real tragedy!

Speaking of tragedies, Sonny (Maurice Benard) will be determined to avoid one. At the scene of the crash, Sonny will drag Michael (Chad Duell) away as the car crackles behind them. It looks like they’ll just barely escape the explosion, but at least they’ll live to tell the tale.

Over with Nelle (Chloe Lanier), she’ll get the assistance she needs from Liesl (Kathleen Gati). Nelle’s baby will finally come into the world, but this schemer will still have some messes to deal with. At the safehouse, Jason (Steve Burton) will give Carly (Laura Wright) updates. He’ll confess that Michael wants Nelle to make a murder attempt, so Carly will naturally have concerns.

Jason will assure Carly that it’s all a setup to trap Nelle, but that won’t exactly bring her comfort. Carly knows how tricky Nelle can be! Once Carly and Jason hear about the accident, they’ll both battle major fears. Elsewhere, Drew (Billy Miller) will meet up with Curtis (Donnell Turner) for a chat. The topic of Drew’s memories will come up, but he won’t think that’s even worth thinking about.

Drew will contend that the flash drive’s gone and that’s that. He won’t see any way he can retrieve the memories he’s longing for. However, Margaux (Elizabeth Hendrickson) managed to track that flash drive down. She’ll pop it in her laptop and peek at all of Andre’s (Anthony Montgomery) files on Tuesday.