General Hospital Spoilers: Sonny Suspects Griffin Framed Like Carly, Will He Step Up To Help Him? 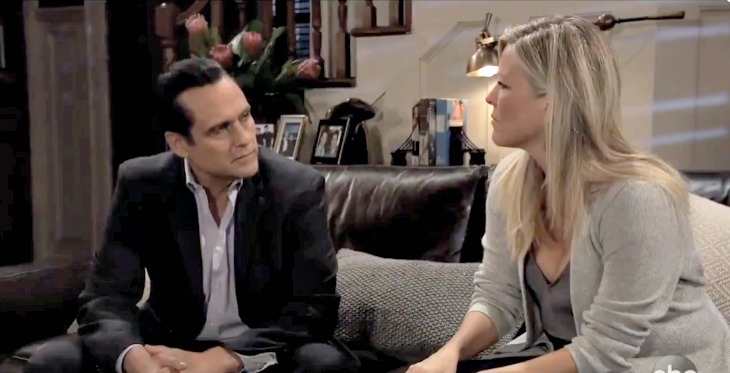 General Hospital spoilers tease that Sonny Corinthos (Maurice Benard) might step up to help Griffin Munro (Matt Cohen) when he finds out Griffin’s been charged with Kiki Jerome’s (Hayley Erin) murder. In previews of November 30th’s episode, we see Griffin talking with Anna apparently in the halls of General Hospital, so he is obviously not being held in jail; maybe Sonny posted his bail and is taking care of legal fees as well?

He may have even retained Diane Miller (Carolyn Hennesy) to represent Griffin! After all, Griffin’s been out of work for a while and Sonny knows that a public defender wouldn’t do the best job of defending him!

GH Spoilers – Sonny Knows There Is A Serial Killer In Town

Sonny knows there is a serial killer in Port Charles who tried to frame his wife Carly Corinthos (Laura Wright) for his first murder, so when he hears Griffin has been charged, he might suspect the same killer murdered Kiki and is attempting to frame Griffin! Griffin is also the son of his old friend Duke Lavery (Ian Buchanan) and that connection means something to Sonny; he will want to do anything and everything he can to help Griffin to beat this framed-up murder rap!

Sonny may wisely point out to Commissioner Jordan Ashford (Briana Nicole Henry) that since the killer framed Carly for Mary Pat Ingles’ (Patricia Bethune) murder, which happened on Halloween, and then Kiki is murdered on Thanksgiving, the two killings may be connected and that the killer planted evidence to frame Griffin.

Griffin is in no state of mind to be answering questions, West Coast. But that isn't stopping Chase from asking them.
An all-new #GH starts RIGHT NOW on ABC! @mattcohen4real #GH55 pic.twitter.com/aA3wuIiA9j

He may not be the only one to point out these connections—other General Hospital spoilers tease that Anna Devane (Finola Hughes) will also help Jordan connect the dots! In addition, Sonny may reason that the killer must be someone who knows all of them…and is hiding in their midst in plain sight, meaning no one is safe from either being murdered or being framed for a murder!

There may be many helpers for Griffin in his time of need, and many who join forces to find the serial killer and bring him to justice. Ryan Chamberlain’s (Jon Lindstrom) time in Port Charles grows shorter and shorter as more and more Port Charles residents bring their perspectives to the manhunt! Keep watching General Hospital and checking General Hospital spoilers frequently to see secrets be revealed and justice be served, possibly with a side of revenge by some!