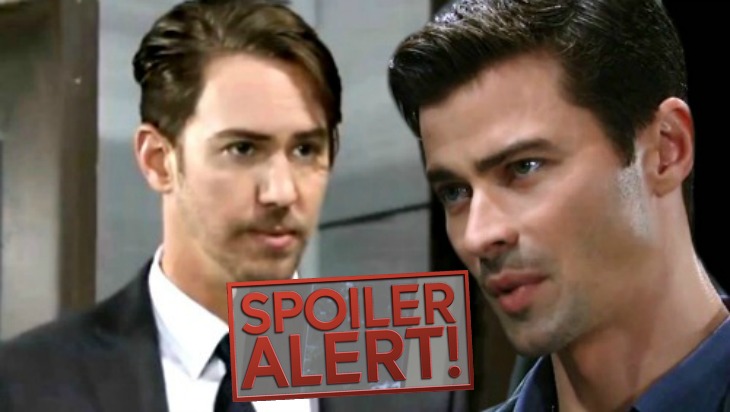 General Hospital spoilers indicate that Peter’s (Wes Ramsey) secret might be safe with Griffin (Matt Cohen) for now. Griffin recently revealed that he knows who the identity of Peter’s biological father is, leaving him both shocked and worried about the future.

Apparently, Griffin wasted no time in letting Peter know the truth. Many believe that Nina might be the reason why Griffin decided to come clean about what he knows, telling Peter to his face that he is the son of Port Charles’ most notorious villain, Cesar Faison. (Anders Hove)

Yet, Peter is trying to turn the tables around. He gives Griffin a huge story about his troubled childhood and past, hoping that he might get some sympathy for him. After all, Peter knows that this is a secret that can’t come out. This leaves Griffin conflicted though, as he is both angry and wants to see Peter turn himself in. But he knows that it won’t be easy. Also, there’s a strong possibility that the truth might make it’s way to Ava.

What’s more, Peter also points out that Griffin hasn’t been very honest himself. Also, Peter has two sets of problems with two different women: Nina (Michelle Stafford) and Maxie. (Kirsten Storms) Nina has made it pretty clear that she wants nothing to do with Peter and that she doesn’t trust him at all. She wants him to leave Port Charles.

Maxie, on the other hand, just feels as though Peter needs to give her time and space. Plus, there might be something brewing between them. What she doesn’t like though, is that she eventually needs to meet Nathan’s Port Charles Police Department replacement.

General Hospital airs weekdays on the ABC network. Let us know what you think in our comments section below. Also, don’t forget to check back with Soap Opera Spy for all the latest news, updates and spoilers on General Hospital and all of your favorite daytime television shows right here!

The Young and the Restless Spoilers: Love Is In The Air? A New Romance For Mariah