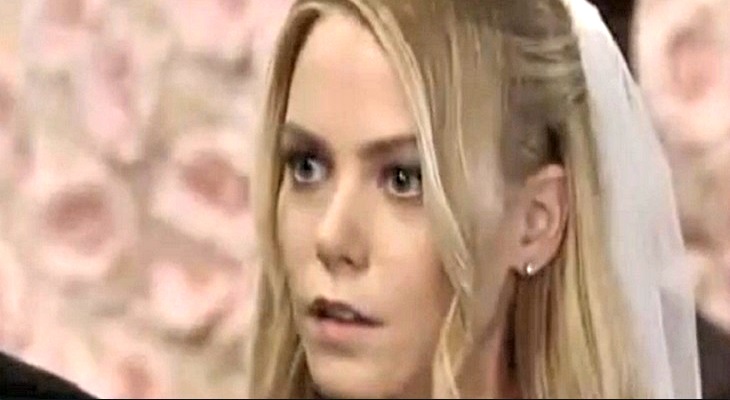 “General Hospital” spoilers for Monday, July 16, tease that Michael (Chad Duell) and Nelle’s (Chloe Lanier) wedding will bring even more drama. Of course, all the soapy fun’s coming from Carly (Laura Wright)! She escaped from Ferncliff to warn Michael about marrying Nelle, so she’s obviously in some serious trouble.

Nevertheless, Carly will at least get to make her spiel before she’s carted away. As Nelle gives her a dirty look, Carly will snarl that she’s dangerous and deadly. She’ll beg Michael to call the whole thing off. “General Hospital” spoilers say Nelle will eventually experience abdominal pain – or at least she’ll claim that’s the case. Nelle lies constantly, so you never really know what to believe.

Regardless, Nelle will head over to GH for an examination. It doesn’t look like the baby’s coming just yet, but Nelle will still be hospitalized for a while. Michael will urge Nelle to rest, but she’ll insist on finishing their nuptials. They’ll be married right there in the hospital room, so Nelle’s clearly committed to her goal.

Meanwhile, General Hospital spoilers tease that Sonny (Maurice Benard) will wonder if Chase (Josh Swickard) can clear up Carly’s legal issues. Her Ferncliff getaway will obviously leave Carly in hot water. Unfortunately, Chase won’t be willing to skirt the law. He’ll point out that it’ll only make things worse for Carly in the end. Chase will follow procedure, so Carly’s going to face major consequences.

However, Carly won’t be sorry for trying to protect Michael. She’d do anything for her son and that’s something she’ll never apologize for. There’ll be more chaos for the actual wedding guests as well. Ava (Maura West) will face off with Bobbie (Jacklyn Zeman) and shut down Griffin’s (Matt Cohen) curiosity. Her beau will feel like she’s avoiding him, which is probably because of the cologne shocker.

Ava will do her best to throw Griffin off the trail and keep all her secrets. She can’t rock Nelle’s boat or else her own relationship could be derailed. Since Nelle and Ava are in a blackmail stalemate, they just have to keep each other happy right now.

Other “General Hospital” spoilers say Mike (Max Gail) will create some awkwardness. He’ll ask Sam (Kelly Monaco) and Drew (Billy Miller) how they met, so they may just tell him it’s a long story. There’s no need to overwhelm Mike with this complicated situation.

Over with Brad (Parry Shen), he’ll seem upset over some news about the baby. Lucas (Ryan Carnes) will undoubtedly fear there’s an issue with the adoption. Will these two still be able to get their kid? We’ll give you updates as other details and rumors emerge. Stay tuned to ABC’s GH and don’t forget to check Soap Opera Spy often for the latest “General Hospital” spoilers, rumors, updates and news.