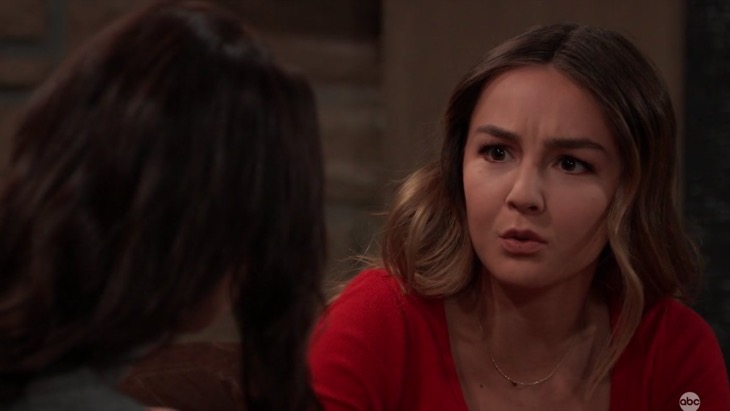 General Hospital spoilers tease that while Kristina Corinthos-Davis (Lexi Ainsworth) tries to make positive changes to her life by moving in the group house where her friend Daisy (Kelsey Wang) lives with all her friends, big sister Sam McCall (Kelly Monaco) and overprotective mother Alexis Davis (Nancy Lee Grahn) will worry that she’s being controlled by the group!

Kristina is trying to change her patterns of bad decisions and unsuccessful romances to something more positive, such as helping others. The Day of the Dawn group seems to be the perfect atmosphere to be able to do this. To change her behavior patterns, she must change herself, and that is difficult at times for a person to do on their own; they need people around them as a support system to encourage those changes.

Alexis should certainly understand that, having been in Alcoholics Anonymous! But instead, her hovering instincts will likely kick in, and Sam’s “spy-dy senses” will kick in and she’ll suspect Kristina’s friends don’t have the purest of intentions! Her sister’s little foray into using her as a guinea pig for essential oils didn’t go over too well, and even though mainstream medicine has acknowledged some holistic remedies have merit, Sam likely just thinks it’s weird!

Do you think Daisy is a member of a cult? #GH pic.twitter.com/fUF9iubA6k

Daisy does seem to show up in the most unlikely of places, apparently trying to recruit for the Day of the Dawn group. Recruiting can be the signs of a cult, although not always. Many mainstream Christian churches such as the Southern Baptists frequently evangelize and reach out to the unchurched, and no evil intent has been documented. On the other hand, soap operas such as “One Life To Live” which formerly preceded General Hospital in the daytime lineup until it’s a cancellation, featured a very evil cult leader named Mitch Laurence (Roscoe Born) over a number of years, along with his minion Allison Perkins (Barbara Garrick).

Characters used to migrate frequently between the ABC Soaps, and now that the Prospect Park lawsuit is settled, which caused the three characters from One Life to Live, John McBain, Todd Manning, and Starr Manning (Michael Easton, Roger Howarth, and Kristen Alderson, respectively) to morph into Silas Clay, Franco Baldwin, and Kiki Jerome pre-Hayley Erin, maybe GH viewers may get a taste of Mitch as the cult leader; that would be something for Alexis and Sam to REALLY worry about! Stay tuned to GH and keep checking General Hospital spoilers frequently to see whether “Day of the Dawn” is a good thing, or something quite evil!

Bold and the Beautiful Rumors: Thorne Exit Storyline – Revenge On Taylor For Losing Darla And Aly?