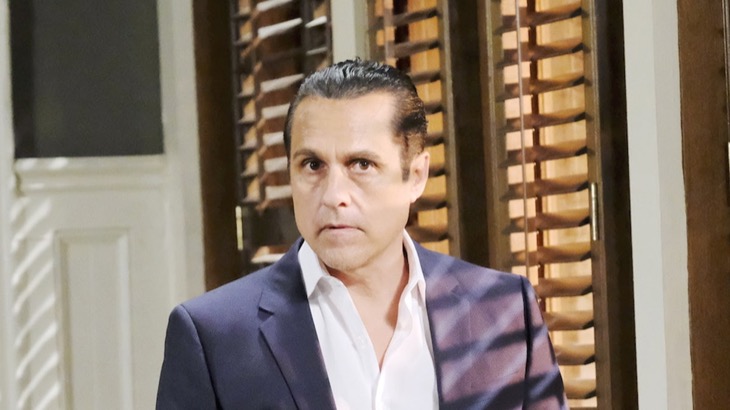 General Hospital (GH) spoilers reveal that the sweet, dimpled- face mobster, Sonny Corinthos (Maurice Benard) that GH fans have adored for years is turning back to his old ways. He seems to have been gentler and kinder these last few years, but if you have been a long time fan, it wasn’t always like that.

Remember when Karen Wexler (Marie Wilson) was underage and was working as a stripper at Paradise Lounge, owned by Sonny Corinthos? She was the daughter of attorney, Scott Baldwin (Kin Shriner) and Rhonda Wexler (Denise Galik-Furer), who died after being hit by a car, and Scott never forgave Sonny for what he had done to his precious daughter.

According to ABC Soaps in Depth, Sonny will be calling on a longtime rival and viewers will remember what Sonny is truly all about. The powers that be have always hinted that he was involved in illicit activities and now that his enforcer Jason Morgan (Steve Burton) is back and has nothing to lose, Sonny can explore his dark side once again.

There doesn’t seem to be much of a rivalry when it comes to opposing families right now since Ava Jerome (Maura West) is preoccupied with having her plastic surgery done to restore her face and Julian Jerome (William deVry) seems to be trying to turn his life around and stay out of the mob life. Could this be Sonny’s chance to completely dominate the underworld or is there more to Sonny’s dark side re-emerging?

General Hospital spoilers reveal that Cesar Faison’s (Anders Hove) name has been mentioned a lot, and a possible traitor, involving the brain mapping of Jason and his twin brother Drew Cain (Billy Miller). Could Sonny be placing calls to help find out what really happened to Jason and the five years he was missing? For GH fans who are new to the show and for those who have been watching for a long time, it sure looks like things are about to get really exciting and dangerous ahead for Sonny and possibly for those around him.

The Young and the Restless Spoilers: Victoria Helps True Love – Cane and Lily Reunite In The City Of Love