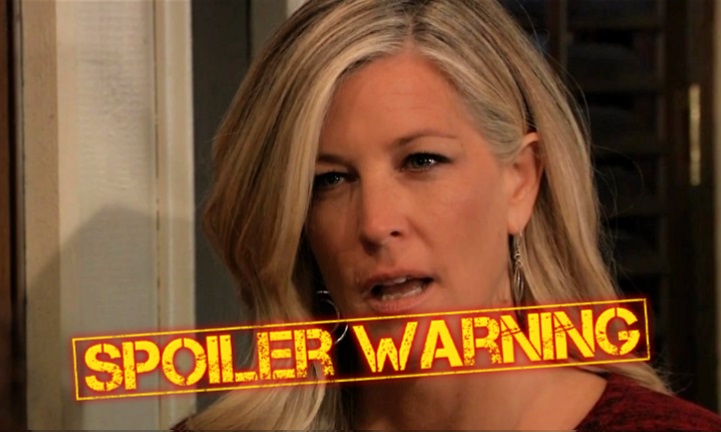 “General Hospital” spoilers for Friday, November 9, tease that Liz (Rebecca Herbst) will offer a shoulder to cry on. When Terry (Cassandra James) drops by, Liz will immediately sense that something’s wrong. She’ll welcome Terry in and wonder what she needs. Liz will be willing to help in any way she can.

This may be about Oscar’s (Garren Stitt) case and the toll it’s taking. Then again, Terry has mentioned some family drama before. No matter what’s bothering her, it should be nice to know she’s got Liz in her corner.

Over with Franco (Roger Howarth), he’ll sit down with a blonde character and ask her to tell him everything. Maybe Franco and Kiki (Hayley Erin) will enjoy a little bonding time. She may mention Sasha (Sofia Mattsson) and how they’re already starting to connect.

Unfortunately, Sasha isn’t Kiki’s real sister or Nina’s (Michelle Stafford) real daughter. She’s certainly shady, so she’ll be making her move with Griffin (Matt Cohen) before you know it. In the meantime, Kiki will have high hopes for the future. She’ll tell Griffin everything’s taking a turn for the better, but she’s about to see how wrong she is!

Other “General Hospital” spoilers say Nina will meet up with Sasha and try to apologize. She’ll realize she might’ve overstepped a bit during their last chat. Nina was concerned when Sasha mentioned her interest in Griffin. She proceeded to flip out when Sasha brought up Ava’s (Maura West) name, so she’ll dial it all down on Friday. Nina will want to rein things in and come off as calm.

NEXT WEEK ON #GH… Sonny gets a glimpse of the Port Charles that could have been. @MauriceBenard #GH55 pic.twitter.com/KCJSFdnjCW

Perhaps Nina will argue that she was just watching out for Sasha. She won’t think Sasha wants to ruin her new relationship with Kiki. Nina also doesn’t want Ava getting involved and making a mess. She’ll make it clear that she cares about Sasha and wants to build on this bond they’re forming.

At Jeanette’s (Ely Pouget) place, Margaux (Elizabeth Hendrickson) will push for the truth. She’ll suspect Sonny’s (Maurice Benard) story is correct, so she’ll want her mom to make an admission. Even if Jeanette refuses to come clean, Margaux has probably heard enough. She can tell her mother’s got something to hide – and that something is ordering a hit on Vincent!

“General Hospital” fans will also see a tight spot for Carly (Laura Wright). Her DNA was found on Mary Pat’s (Patricia Bethune) corpse, so she’ll get grilled at the police station. Carly won’t get why they’re so focused on her. Since the body was found in Ava’s gallery, she’ll argue that Ms. Jerome deserves a closer look.

Speaking of Ava, she’ll return to see “Kevin” at GH. Ryan will happily welcome Ava and intrigue her with more of his twisted logic. It sounds like Ava will sink further and further into danger, so stay tuned. We’ll give you updates as other news and rumors emerge. Stick with ABC’s GH and don’t forget to check Soap Opera Spy often for the latest “General Hospital” spoilers, rumors, updates and news.