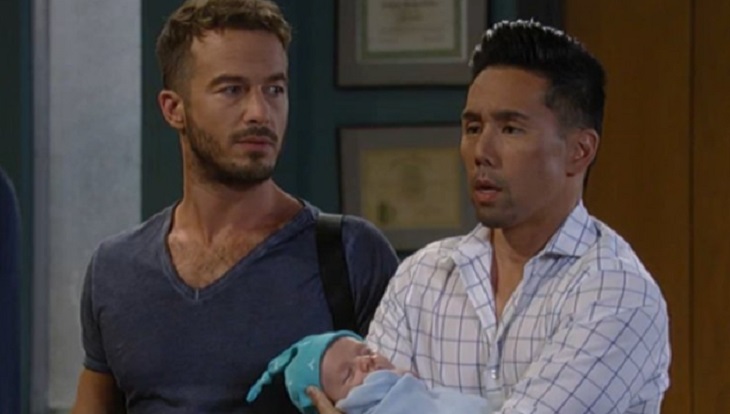 That’s because Alexis will get the call that Lucas [Ryan Carnes] and Brad Cooper [Parry Shen] definitely don’t want to hear, the birth mother wants the baby back.

The news hits Brad especially hard, as this is the family that he’s always wanted. To complicate matters even more, Brad is hiding the fact that the the real Wiley died from his husband. The baby that he is now passing off as Wiley is actually Nelle Benson [Chloe Lanier] and Michael’s [Chad Duell] biological son.

Actor Parry Shen, who plays Brad, tells CBS Soaps in Depth, “The situation just went from DEFCON 2 to DEFCON 1. He was already deeply conflicted and stressed with accepting Nelle’s child and hurting Michael, but to deal with possibly having to give this child to a woman who isn’t his birth mother is something even worse altogether.”

That’s when a panicked Brad goes to Julian for help. Despite Julian’s estrangement from Lucas, there’s no one else that Brad can turn to. Yet, if there is anyone who can help in this situation, especially when it comes to sheltering Lucas from the devastating news of a dead baby, it would be Julian.

Of course, fans will just have to tune in to find out what will happen next!In the meantime, General Hospital airs weekdays on the ABC network. Check your local listings for times. Let us know what you think by leaving us a line with your thoughts in our comments section below.

The Bold and the Beautiful Spoilers: Is Hunter Tylo Back As A Cast Regular?