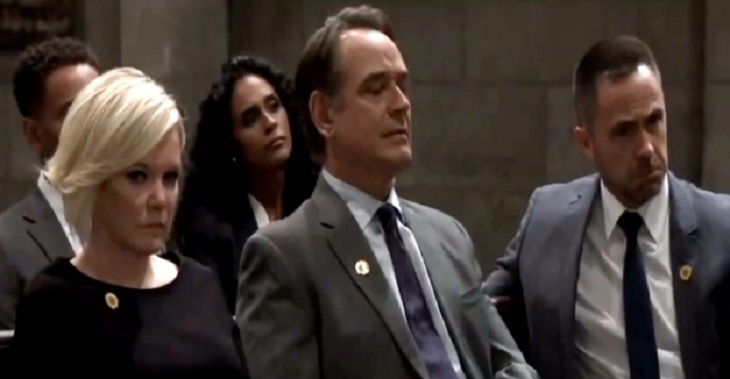 General Hospital spoilers indicate that sparks will fly as Port Charles says their last good-byes to the beautiful Kiki Jerome [Hayley Erin] at her funeral this week. That’s because her own mother Ava Jerome [Maura West] will pick a fight with not only Carly, but also Griffin, who will show up to the funeral uninvited.

At first, Ava didn’t plan on being at the funeral, as the last conversation she had with her daughter was a nasty one. Kiki died with the two of them in a very bad place, leaving Ava with guilt, denial and anguish. Her last exchanges with her daughter is one that she definitely doesn’t want to remember. That’s why the funeral is being organized and arranged by Julian, Scott and Franco instead.

General Hospital Spoilers – Ava Pulls Herself Together For Funeral

After thinking about it for some time, General Hospital spoilers reveal Ava found enough strength in her to attend the funeral, but with both Ryan (who ultimately killed Kiki, unbeknownst to Ava) and Julian Jerome [William deVry] by her side. At the funeral, Ava is surprised to see both Griffin and Carly with Sonny and does the unthinkable by picking fights with them.

General Hospital co-head writer Shelly Altman tells ABC Soaps in Depth, “She understands that Carly and Sonny loved her daughter, but she also wonder if their motives in coming here aren’t solely to mourn Kiki, but also to point out to her and to remind her of her own guilt in the loss of their son.”

What’s more, Ava also feels baffled by Griffin Munro’s [Matt Cohen] presence. Shelly adds, “In her heart, she knows he’s not guilty of killing Kiki but she wants someone to blame. She wants him to be guilty because that would strangely vindicate her for her actions in trying to get Kiki away from him.”

Young and the Restless Spoilers: Reed Makes An Explosive Return This Week, Determined To Find Truth About JT’s Murder