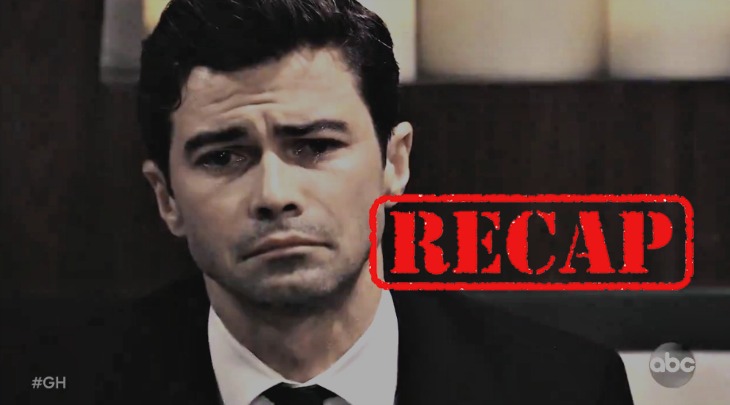 General Hospital (GH) recap for Wednesday, November 28, 2018, reveals, Nina (Michelle Stafford) is rushing Charlotte (Scarlett Fernandez) to join her so they can see the Nutcracker.

Valentin (James Patrick Stuart) is at the door; Charlotte invited him to use the extra ticket. Valentin tells Nina he assumes she didn’t know he was going. Nina is ok with Valentin joining them, and they set out for New York. Valentin arranged a carriage ride home. Nina is ready to order room service and sends Charlotte to change for bed. Valentin informs Charlotte that it was not ok to lie to her about Nina’s invitation. Valentin doesn’t have a room, so he has to sleep on Nina’s couch. Charlotte demands Valentin give Nina a goodnight kiss too.

General Hospital’s Jocelyn (Eden McCoy) goes to see Cameron (William Lipton) and tells him about the conversation with Oscar (Garren Stitt). Jocelyn tells Cameron she and Oscar are back together. Jocelyn isn’t mad at Oscar she’s mad at Cameron. Jocelyn asks how long she and Cameron have known each other. Jocelyn tells Cameron he was supposed to have her back, Oscar was hurting and not in the best place to make this decision. Cameron thought Oscar deserved the bigger favor.

General Hospital’s Laura (Genie Frances) is with Jake (Hudson West), Aiden (Jason David), Liz (Rebecca Herbst), and Franco (Roger Howarth). The waitress speaks to Laura about her separation from Kevin (Jon Lindstrom). Jake asks if Laura and Kevin aren’t married anymore. Aiden tells Jake he is hurting grandma’s feelings. Liz lets Franco take the boys to get some dessert. Liz speaks to Laura who tells her she chose to release the statement about her marriage.

As if Elizabeth's plate weren't full enough… today happens. Can Franco help her through the wilderness? #GH is brand-new and STARTS NOW on ABC! #GH55 pic.twitter.com/biircj2yWP

Liz asks Laura what happened; Laura believes she had one husband when she left and another when she returned. Laura tells Liz that Ava is involved as well. Laura asks Liz how Aiden is doing. Liz tells Laura that Aiden gets bullied at school, but the teacher can’t say by whom. Liz thinks Cameron should be more supportive and she’s upset because he didn’t join them for the movies.

General Hospital’s Franco talks to Jake about Aiden. Jake tells Franco that kids think Aiden is weird. Franco interrupts Liz and Laura and tells her they should go home. Laura wishes Franco Happy Thanksgiving. Liz sends Franco and the boys out and tells Laura she is better than a thousand Ava Jerome’s (Maura West). Franco shows Liz the drawing Aiden made where he is away from the family back in a corner. Liz yells at Cameron for not going to the movie and tells him that Aiden looks up to him and is having problems. Cameron is visibly upset and tells Liz that he knows about Oscar’s tumor and now Jocelyn knows as well and storms off.

General Hospital’s Griffin (Matt Cohen) asks Maxie (Kristen Storms) if Kiki (Hayley Erin) ever showed up. Maxie sends him to the deck to see if she’s there. Curtis (Donnell Turner) comes to get Chase (Josh Swickard) and Valerie (Brytni Sarpy) who ask what is going on; he informs them his honeymoon suite just became a crime scene. Chase informs everyone it is a crime scene and tells them not to leave because the boat just became a crime scene.

Chase questions Lulu (Emme Rylan) who isn’t much help. Chase is ready to question Maxie. Maxie tells Chase that Griffin tried to get in touch with Kiki and then disappeared for a few minutes. Griffin disappeared again when Kiki wasn’t at the reception. Jordan (Briana Nicole Henry) releases the guests to go home. Jordan tells Lulu she’ has to leave as well. Chase calls Jordan; he thinks he found something at Griffin’s apartment.

General Hospital’s Curtis carries Jordan over the threshold, and they discover a body in their bed. Jordan and Curtis call out to the person in the bed. Jordan checks for a pulse, there is none. Valerie has Griffin to join Jordan in the room downstairs. Griffin drops the wrap when he walks in the door. Griffin pronounces Kiki dead, and Jordan tells him he has to leave the room. Griffin comes back to the ballroom, Maxie and Lulu figure out Kiki is the one who is dead. Griffin is distraught over Kiki.

Jordan asks Griffin if he can answer some questions. Jordan asks when the last time Griffin saw Kiki was. Griffin tells Jordan he got called to GH and left Kiki at her apartment. Griffin went back to check on her and found the door ajar, and a broken vase. Griffin picked up the wrap and found a little blood on it; he had no idea he was walking into a crime scene. Jordan says Kiki was killed somewhere else and moved there. Jordan wants to search Kiki and Griffin’s apartments. It is clear that Jordan sees Griffin as a suspect. Griffin goes to Ava’s room to tell her about Kiki’s murder.

Ryan And Ava Sleep Together

General Hospital’s Ryan (Jon Lindstrom) shows up at Ava ’s and asks if she’s ready for dessert. Ava feels like she’s taking advantage of the situation with Laura. Ryan isn’t worried about Laura and doesn’t want Ava to hide her desires. Ryan starts kissing Ava; she makes him promise she won’t find him in bed with her daughter. He assures her she won’t. Ava tells Ryan she needs to go pick up Avery (Ava and Grace Scarola) from Sonny’s (Maurice Benard), she still has one daughter who loves her. Ryan advises Ava to pretend Kiki doesn’t exist. Ryan tells Ava that Avery can wait and pulls her into a kiss.

The Bold and the Beautiful Recap Wednesday, November 28: Bill Warns Steffy She Better Reign Taylor In