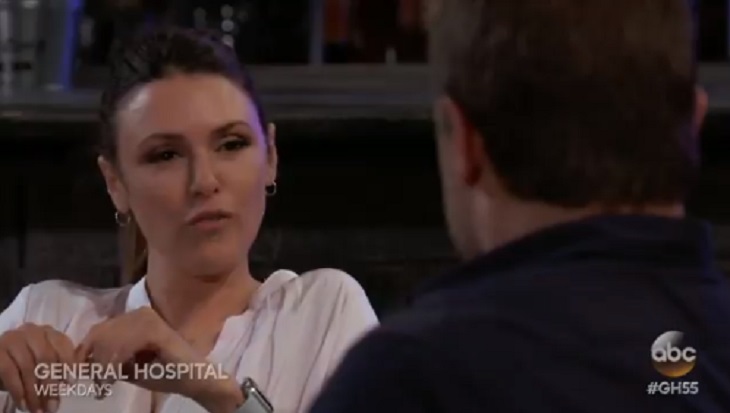 Drew tells Curtis there is more to Margaux than he knows.  Curtis questions Drew about the picture in the Invader. Drew tells Curtis about the conversation with Margaux.  Drew says Margaux got interested way to quickly.  Drew is convinced Margaux wants to use him to take down Sonny (Maurice Benard) and Jason (Steve Burton).  Curtis argues that Margaux could want him for himself.  Curtis wants Drew to bring Margaux to his wedding.

Margaux Has Words With Peter

General Hospital’s Margaux wants to confront the editor of the Invader.  Peter (Wes Ramsey) tells Margaux she is talking to him.   Peter tells Margaux he did nothing wrong.  Nina (Michelle Stafford) tells Maxie (Kirsten Storms) the 30 days is up today. Maxie approaches Peter.  Peter didn’t think Lulu (Emme Rylan) and Maxie were friends anymore.  Maxie tells Peter she and Lulu are in a good place.  Lulu shows up and wants to know about the reporter position.  Maxie tries to talk Lulu out of this.  Lulu takes the position.

General Hospital’s Lulu and Nina talk about Charlotte’s (Scarlette Fernandez) school meeting. Lulu tells Peter she won’t be joining him Friday.  Valentin interrupts Maxie and Nina’s lunch. Valentin loves Nina and wants to be with her.  Nina leaves.  Valentin tells Maxie to stop using Nina to punish him. Lulu goes and meets Drew.  Lulu doesn’t like being demoted Lulu wants Drew to go to bat for her.  Drew tells Lulu to be patient.

General Hospital’s Margaux joins Drew and they talk about the picture.  Margaux starts to leave, Drew stops her.  Drew invites Margaux to lunch.  Margaux tells Drew about talking to Peter.  Drew tells Margaux she comes on strong.  Drew wants to know what else is going on in there.  Margaux tells Drew about her first case. Drew asks if Margaux is DA first and everything else second.  Drew asks about Margaux’s passions.  Margaux turns it around and wants to know about Drew’s passions.

General Hospital’s Kim (Tamara Braun) is at the hospital on the phone.  Lucas (Ryan Carnes) and Brad (Parry Shen) show up with the baby.  Lucas tells Kim they may not have him much longer.  Brad and Lucas pray the mother changes her mind again.  Alexis (Nancy Lee Grahn) tells Brad and Lucas that their past is now fair game.  Julian (William DeVry) joins Kim at the hospital.  Julian doesn’t know how the birth mother could do this to Brad and Lucas. Kim tells Julian that the mother can’t make sure her baby is safe if they are apart. Kim has to check on a patient and ask Julian to wait. Julian invites Kim to lunch.  Kim declines, Julian calls the birth mother for a meeting.

General Hospital’s Alexis and Diane (Carolyn Hennesy) are talking about the adoption.  Alexis wonders why the mother has changed her mind. Diane says there are no red flags with the mother.  Alexis assures her she has prepared Brad and Lucas for this.  Diane wishes they weren’t going through this.  Diane walks Alexis out.  Julian goes into Diane’s office to look for information.  Alexis needs Brad and Lucas to keep it together.  Brad calls Julian and wants information.  Julian tells Brad to be patient.  Brad tells Lucas he has to get some air. Brad is hopeful they can keep Wiley.

General Hospital’s Nina arrives at Diane’s office.  Diane has the papers ready.  Diane asks Nina if she wants to make this go away.  Nina says she has to divorce her husband. Nina admits to Diane that she still loves Valentin.  Diane tells Nina she is allowed to have reservations.  Diane can put this in Nina’s file and she can wait.  Diane has been through this with too many people who still love each other.  Nina signs the papers anyway.