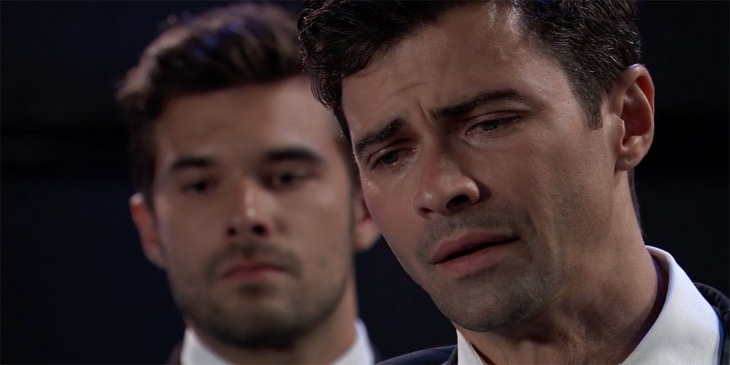 General Hospital (GH) recap for Thursday, November 29 reveals, Ava (Maura West) finally answers the door to Griffin (Matt Cohen) and asks what is so important. Ava tried to throw Griffin out after telling him she will be there for Kiki (Hayley Erin) to run back to when he cheats on her.

Griffin tells Ava that Kiki is gone, she thinks she left town. Griffin tells her no, Kiki is dead. Ava thanks Griffin is lying and slaps him. Ava tries to get “Kevin” (Jon Lindstrom) to say he’s lying. Ryan (Jon Lindstrom) tells Ava that Griffin thinks he is telling the truth. Griffin calls Julian (William DeVry) and tells him about Kiki. Julian tells Alexis (Nancy Lee Grahn) about Kiki; she advises him to go to Ava, but Julian doesn’t know that he can do this right now. Alexis tells Julian he doesn’t have to do this alone.

General Hospital’s Anna (Finola Hughes) and Finn (Michael Easton) are with Britt (Kelly Thiebaud) and have the tracking system set up on the phone. Britt asks if they are willing to kill her to arrest her mother. Finn was supposed to give Britt the common cold. Finn gave her a modified version of the cold. Britt wants to end this instead of betraying her mother; Anna threatens to send her back to prison.

A rogue text message thwarts Anna's mission to find Obrecht. What does the future hold for her relationship with Finn?
Tune into an emotional, new #GH – STARTING NOW on ABC! #GH55 pic.twitter.com/8voWP2Vg57

Britt tells Anna her mother has an alert out on her name, so she has probably already seen the story. Anna tells Britt her mother may lack maternal instincts. Anna follows Finn outside and asks if he is setting up an alert himself. Anna then asks Finn if he got a text from Hayden (ex- Rebecca Budig) when she wants to meet him. Anna thinks Finn is avoiding talking about Hayden texting him. Finn tells Anna Hayden wants to meet the day after tomorrow. Finn wants Anna to go with him.

Anna can’t go to Rome with Finn because she can’t abandon her plan to catch Liesl (Kathleen Gati). Britt’s phone rings, Anna gets there to listen. Liesl has had someone else to call and asks if she’s working with Anna to trap her. Liesl asks Britt what is wrong with her. Britt tells Liesl that Finn is her doctor, she begs her to take her out of this place and take care of her.

Hayden tells Finn that leaving him was one of her biggest mistakes. Liesl tells Britt that Finn is an exceptional doctor and will save her. Britt begs Liesl to come to her, but she refuses. Anna figures out where Liesl is because of the food Liesl ordered. Anna figures out that Liesl is in Cuba. Finn wants to go with Anna, but she wants him to resolve things with Hayden.

Alexis and Julian have a lot of catching up to do. Will the news of Kiki's murder make its way to Charlie's? #GH is brand-new and STARTS NOW on ABC! pic.twitter.com/xj9GJUDMMF

General Hospital’s Alexis goes to Charlie’s for a piece of cheesecake. Alexis invites Julian to join her and asks how his first Quartermaine Thanksgiving fiasco went since he left before dessert. Julian tells Alexis things didn’t turn out as he planned on Thanksgiving. Julian tells Alexis that Kim wanted him to do something and found out he didn’t mean it. Julian says the one time he does the right thing, and Kim is mad at him. Alexis says this Thanksgiving was the best of the last three. Alexis tells Julian she is sorry about Kiki, they hold hands and comfort each other.

Carly And Sonny Learn About Kiki

Ryan tells Carly that Ava was late because Kiki is dead. Sonny (Maurice Benard) asks if Carly got in touch with Ava, she tells him Kiki is dead. Sonny asks who would do that to Kiki, Carly says it makes no sense. Carly talks about seeing Kiki at Morgan’s (ex- Bryan Craig) memorial and how proud Morgan would have been of her.

General Hospital’s Jordan (Briana Nicole Henry) says Chase (Josh Swickard) found something she needs to talk to Griffin about before she reveals a suspect. Jordan is trying to find Griffin, but he’s not at his or Kiki’s apartment. Chase suggests that Griffin has run. Chase tells Jordan that the first sign of a struggle was the vase. Ava comes in demanding answers as Kiki’s body is brought up in a body bag.

Ryan covers his wrist as if he is covering a cut or scratch. Ava unzips the bag and sees Kiki. Ava begs Kiki to wake up and then orders her to wake up. Ava is distraught over Kiki’s death and hugs her and cries no over and over. Chase needs to talk to Griffin again. Griffin tells they got a late start because they made love first. Griffin says he got called to the hospital about his suspension.

Chase shows Griffin the knife and asks how it got in his apartment. Griffin asks what that is; Chase tells Griffin that is a knife from his butcher block that was wrapped up and hid in his closet. Ava attacks Griffin and accuses him of killing Kiki, Ryan escorts her home. Chase gets a call, the blood on the knife is Kiki’s. Alexis advises Griffin to stop talking. Ryan gives Ava and drink and holds her. Julian is upset that Alexis is intervening on Griffin’s behalf. Chase arrests Griffin for murder.

General Hospital’s Peter (Wes Ramsey) is with Maxie (Kirsten Storms) at her place. Peter made sure the babysitter had a ride home and had checked the windows. Peter doesn’t hate Anna anymore. Maxie is glad that Peter is there with her. Peter and Maxie toast to today because it is all they have.

Peter tells Maxie he wishes he had gotten to know Nathan. Maxie tells Peter otherwise they live with regrets, they need to find something to be happy about every day. James cries and stops Peter and Maxie from kissing. Peter leaves to go home and apologizes for the almost kiss. Maxie locks the door behind Peter who sits in her hallway outside the door.

Young and the Restless Recap Thursday, November 29: Nate Accuses Devon Of Self Medicating