General Hospital POLL: Who Is The Better Woman For Finn? VOTE! 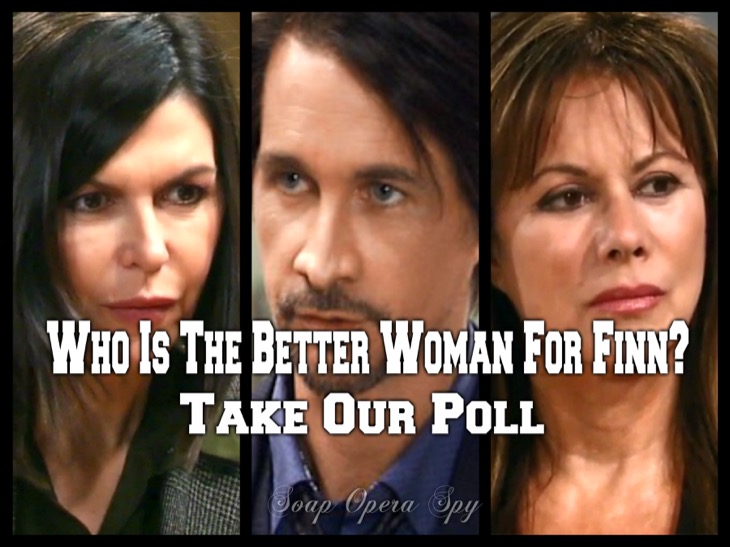 General Hospital Dr. Hamilton Finn (Michael Easton) is quirky, OCD, lovable, and women enjoy his company. Recently Finn and Anna Devan (Finola Hughes) hooked up to play spy games and ended up falling for each other. Their banter was deliciously sensual, and one could see they both enjoyed the game. Anna had been content to be alone until she shared a kiss with the good doctor on New Year’s Eve and Finn, having just lost General Hospital Hayden Barnes (Rebecca Budig), decided to let his guard down until Anna pushed him away for his own good.

Some General Hospital fans are in love with this couple and think they are a match made in heaven. General hospital spoilers indicate Finn obviously has strong feelings for her and was hurt by the breakup. Unfortunately, other General Hospital sources tease Finn may have found more than just a friend in Alexis Davis (Nancy Lee Grahn).

Recently Alexis and Finn have been seen around town together; sharing dinner, stories of love and AA meetings. Finn also joined her at Charlie’ pub to watch election results, commiserated with her when she lost and took her home. Alexis, like Anna, is trying to get over a past love and Finn has served as a very nice distraction.

There are General Hospital fans who favor Alexis over Anna. They believe Alexis is a better and safer match. After all, as Alexis observed, Anna is a WSB agent and out of Finn’s league. They seem to be developing a solid friendship.

Should they become a couple? Or is Alexis still too in love with Julian Jerome (William DeVry) to fall for Finn? General Hospital Molly Davis (Haley Pullos) would certainly appreciate this match; believing anyone is better than Julian.

What do you think? Is Anna better for Finn or would you prefer Alexis? You decide, and please be sure to vote in our General Hospital Soap Opera Spy Poll.

The Young And The Restless Chatter: Judith Chapman Talks About Gloria-Victor Romance – Will It Ever Happen?