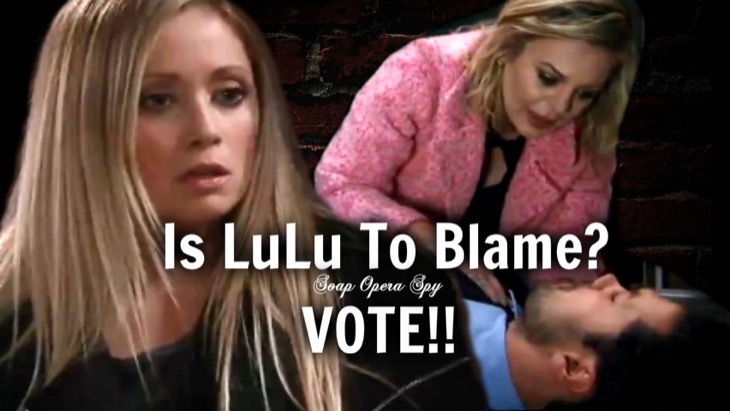 Now that Nathan (Ryan Paevey) is gone, a lot of people are trying to figure out who is to blame for his death. He was shot and killed by none other than his diabolical father Faison (Anders Hove) on General Hospital.

LOVE GENERAL HOSPITAL? SIGN UP FOR OUR EXCLUSIVE GH NEWSLETTER!

This shouldn’t come as a surprise, but many people are pointing their fingers at Lulu Falconeri (Emme Ryland) for starting this mess. From early on, it was obvious that Lulu’s new career as a reporter was putting everyone in jeopardy, including herself. But at the same time, she wanted to take this chance with Faison because she was tired of living life as a stay at home mom.

It’s without a doubt that Nathan’s wife Maxie (Kirsten Storms) will blame Lulu for putting her husband in the line of fire. Maxie and Lulu’s friendship will never be the same. Maxie lost the most important person in her life – the father to her unborn baby. Even though she has her family, her baby and her future to think of, Maxie’s life will never be the same without Nathan. A lot of viewers think that Lulu’s thirst for fame and her quest to become a successful investigative journalist might be to blame. She made a lot of moves without thinking through any of the possible consequences. As a result, her selfish motives might have destroyed her best friend’s family.

Related: General Hospital RUMOR: Is Genie Francis Returning To The Young And The Restless?

So tell us, do you think Lulu is responsible for Nathan’s death? Is she the one how started it all by outing Nathan as Faison’s son? If Faison didn’t end up coming back to Port Charles, then Nathan could still be alive today. At least, that’s what some viewers believe! Drop us a line with your thoughts in our comments section below.

General Hospital airs weekdays on the ABC network. Don’t forget to check back with Soap Opera Spy for all the latest news, updates and spoilers on General Hospital and all of your favorite daytime television shows right here!

The Bold and The Beautiful Week Ahead Spoilers: Thorne Makes A Move On Katie, Wyatt Furious