General Hospital Poll: Do You Think Peter and Maxie Have Chemistry? 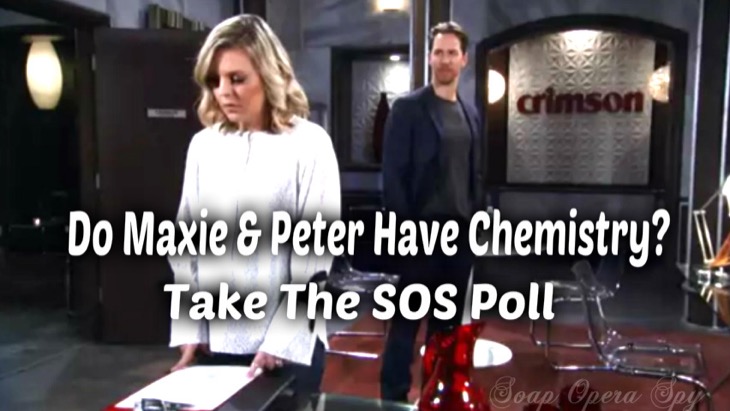 General Hospital Maxie West (Kirsten Storms) and Peter August (Wes Ramsey) have become very close since the death of Maxie’s beloved husband Nathan West (Ryan Paevey) a few weeks ago. General Hospital fans are beginning to wonder if they may become romantically involved soon. Do you see the chemistry between these two?

RELATED: Is Genie Francis Making A Comeback – Laura Back To GH?

Peter August was all set to leave Port Charles after his father General Hospital Cesar Faison (Anders Hove) shot and fatally wounded his son Nathan however, it seems Peter has become attached to his sister-in-law and is determined to stick around to help Maxie deal with her grief. He was there to comfort Maxie when she broke down at Nathan’s graveside and ran into her at the Metro Court Hotel and listened as she talked about Nathan and her unborn child. Peter even went so far as to accompany Maxie to General Hospital while she took the genetic test to determine if her baby was healthy. They hugged each other excitedly when the results came in and fans say they saw chemical sparks fly. Fans of this pairing say there is an attraction developing and they believe Peter and Maxie will soon be together romantically.

Other General Hospital fans say it is much too early for Maxie to start a romantic relationship; with her brother-in-law no less. They believe Maxie could never love another man beside Nathan. General Hospital Nina Cassadine (Michele Stafford) has warned Peter to keep his distance. Nina believes Maxie is much too vulnerable to start thinking about a relationship, but some fans think it’s too late and the love story has already begun.

General Hospital spoilers hint Peter’s identity will be revealed soon. What will this mean for Maxie? Has she become so attached and attracted to Peter that she would forgive him for hiding his identity? Many fans think Maxi and Peter will be the next hot couple on General Hospital. Tell us what you think. Do you see the chemistry between Peter and Maxie? You decide, and please vote in our Soap Opera Spy Poll.