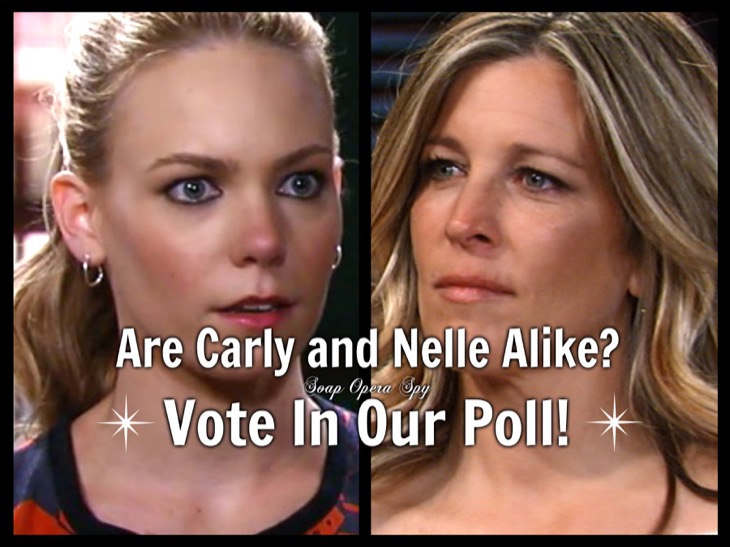 General Hospital spoilers reveal that Nelle Benson (Chloe Lanier) is having a baby and it kind of feels like deja vu for fans of Carly Corinthos (Laura Wright), who knew her when she first arrived in town and while she was pregnant with Michael Quartermaine Corinthos (Chad Duell). We know that Nelle’s pregnancy is real because Michael’s grandmother, Dr. Monica Quartermaine (Leslie Charleson) confirmed it during an exam, after Nelle fainted. But what if Nelle is just like Carly, and Michael really isn’t the daddy? The similarities make GH fans wonder, who do you think is more scandalous- Carly or Nelle? Please vote and let us know what you think?

GH sources reveal the similarities between the adopted sisters are a bit freaky considering they didn’t grow up together, nor know anything about the other until recently – at least Carly didn’t! Carly came to Port Charles with a chip on her shoulder, set on destroying her birth mother, Bobbie Spencer (Jacklyn Zemen), ruined her marriage by sleeping with her then husband, Dr. Tony Jones (Brad Maule), sounds familiar? After she seduces Tony, they have a bad fight and she sleeps with AJ Quartermaine (then-Billy Warlock); he can’t remember the night they had together so Carly insists the baby is Tony’s. Tony wants to raise the baby along, forcing Carly to reveal she is Bobbie’s daughter and the baby is really Jason Morgans’ (Steve Burton).

This could be karma coming back for Carly right now, Nelle came to town, made herself an honorary member of the Corinthos family by claiming she was forced to donate a kidney to Joss Jacks (Eden McCoy), she then drugged Sonny Corinthos (Maurice Benard), when he was mourning the death of his son Morgan (Bryan Craig), and made him believe they slept together; when the truth came out, Nelle confessed that she was indeed, Carly’s adopted father, Frank Benson’s daughter. Michael Corinthos, who has always been compassionate and forgiving, took Nelle in, repeatedly forgave her, saying she was simply “misunderstood”.

General Hospital spoilers suggest that this is where the comparisons end though. Nelle was hired by Nina Reeves (Michelle Stafford) to spy on her husband, but that job didn’t last too long. Nelle tried to blackmail Valentin Cassadine (James Patrick Stuart), but even though it ultimately failed, it shows that Nelle has no fear and she will definitely go after what she wants, and that she can be very devious when needed.

Nelle had Avery Corinthos’ (Grace and Ava Scarola) nanny fired after she planted jewelry in her bag to make it look like she stole it, so she could get hired. She also stole money from the Metro Court. Nelle is still a suspect in the mysterious death of her fiance Zachary Grant; but GH fans know none of this really compares to some of things big “sister” Carly has done BUT Nelle is a lot younger and just getting started!!

GH spoilers tease that if we list all of Carly’s crimes, we would have a rap sheet going for days, so here are some of the “worst of the worst”, besides the ones already mentioned. She drugged a sober AJ, with drugs she stole from Tony to make it look like he had fallen off the wagon. She betrayed Sonny, setting him up to be arrested by the FBI. She faked her death in 2002. How about the countless times she held people at gunpoint, like AJ, Ric Lansing (Rick Heasrt), Lorenzo Alcazar (Ted King), to name a few?

Carly has blackmailed Alexis Davis (Nancy Lee Grahn) into being her lawyer against Sonny, or she would reveal that Kristina was his daughter. She’s switched paternity results of Spencer Cassadine (Nicolas Bechtel), so Jasper Jacks (Ingo Rademacher) was believed to be the father of Courtney Matthews’ son, not Nikolas Cassadine (Tyler Christopher). She has cheated, had multiple affairs, assaulted many, many people and committed fraud. The things Carly won’t do to protect those she loves, are endless

General Hospital’s Carly is not someone you’d want to be enemies with. Many people in Port Charles fear her Mobster husband, but clearly they underestimate the woman behind the man! General Hospital spoilers would like to know who do you think is truly more scandalous- Carly Corinthos or Nelle Benson? Please vote and let us know what you think.