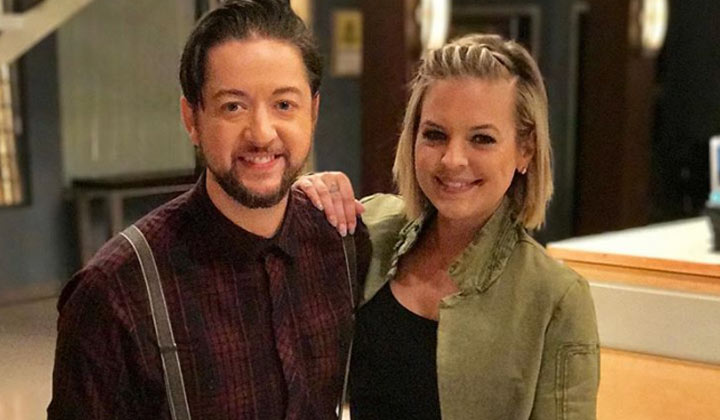 General Hospital spoilers tease that Maxie Jones (Kirsten Storms) could be paired with any one of several eligible male characters in Port Charles when she’s ready for romance again. In a recent article in ABC Soaps In Depth, Kirsten talks about possible future romantic pairings for Maxie, although there’s one from the past that she believes should be left there!

With at least three other possible romantic partners she could be paired with, quite a few General Hospital fans remember Maxie and Spinelli (Bradford Anderson) and their quirky, funny escapades together and want “Spixie” to be recreated! Kirsten doesn’t share that sentiment. She feels “Spixie” needs to stay in the past and that Maxie and Spinelli should remain long distance friends and co-parents to their daughter Georgie (most recently Lily Fisher).

A revived Spixie just would not work anymore. Bradford Anderson is recurring on GH, and as witnessed when Blake Berris played Spinelli briefly when Bradford wasn’t available, a recast Spinelli wouldn’t work either! Fans are too attached to Bradford’s version! Quite a few fans think she and Michael Corinthos (Chad Duell) would make a good pairing with her too, although she doesn’t mention him in the article.

However, Kirsten says in the article there are at least two eligible bachelors she could see Maxie being paired with romantically in the future. One is Peter August! She says she is very comfortable working with Wes Ramsey, and is quoted as saying of him, “He’s the sweetest guy!” She acknowledges that Peter cares about Maxie a great deal—-Maxie just has to figure out how she feels about Peter.

She can also see a potential romance between Maxie and Chase (Josh Swickard). However, Peter may be jealous if this happens…she quotes Wes Ramsey as having watched her tape scenes with Josh, and saying he was not sure how he felt about that! Besides, as she also said in the article, the fact that Maxie has been around Chase so often and he’s not appeared shirtless even once has to say something!

She also mentions it’s been a thrill for her to work with Michelle Stafford and get to know her. Nina and Maxie have become closer onscreen as family following the too untimely death of Nathan West (Ryan Paevey). She mentioned she had her own feelings about that and him, and in past articles she’s been quoted as saying she wore a pendant he made for her at Nathan’s funeral.

She is also happy that her real life best friend Emme Rylan and she are mending fences as their General Hospital counterparts Lulu and Maxie. And she loved filming the pool noodle fight between the two of them, and looks forward to more Lulu and Maxie stories!

Keep watching GH and reading General Hospital spoilers to see what’s ahead next for Maxie!

The Young and the Restless Weekly Spoilers September 24 to 28: Billy Comes Clean – Mariah Learns About Nick and Phyllis Hookup & More