EastEnders Spoilers: Phil Turns On Sharon – She Had The Missing Money This Whole Time! 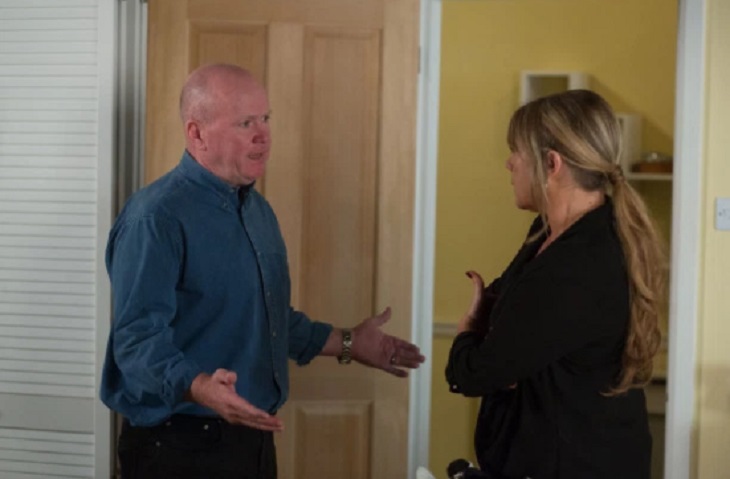 Next week Sharon (Letitia Dean) becomes collateral damage on EastEnders when Aidan (Patrick Bergin) and Phil (Steve McFadden) figure out she’s the one who looted their loot. Will she pay for her deception with her life?

In the coming days the twisty-turny plotline involving sly Aidan and his gang of merry con men reaches its apex, with Phil in line for a nasty surprise he didn’t see coming. All this time he was barking up the wrong tree trying to recover the heist money, and it was Sharon who had it!

What will Phil do once he discovers her massive betrayal? It’s not as if he’s as pure as the wind driven snow, so anything short of forgiveness would be hypocritical. Or would it?

After all, Sharon has stood by as Phil frantically looked for the money, his life at risk. Who does that to their spouse?

As Phil continues his futile search for the cash, he gets together with Aidan who has a good question for him: Where did the money to re-open the club come from? Sharon did it while Phil was away, and for his part he was none too happy to learn of her activity upon his return.

As Jay (Jamie Borthwick) puts the screws to Phil to neutralize Aidan, Mick Carter (Danny Dyer) is trying to come up with a way to do the same thing.

Look for things to come to an irreversible and possibly fatal end next week as all of Aidan’s enemies pull out the stops to end his reign of terror, and the truth about the money finally comes to light.

Explosive EastEnders spoilers reveal that Phil gives Sharon a bone-chilling message; has he turned his anger from Aidan onto her?

How will she figure into the bombshell drama set to tear the Square apart when the men come face to face? Or will she be the one to stop Aidan once and for all, at the cost of her own life?

The Young And The Restless Star In Hospital, Opens Up About Painful Disease