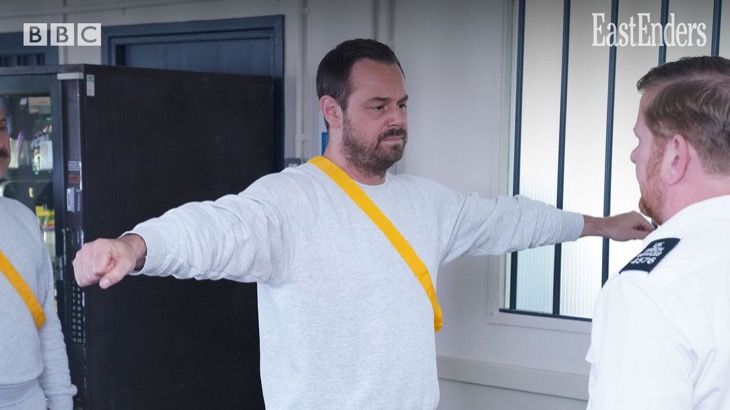 Eastenders spoilers indicate that Mick Carter’s (Danny Dyer) situation is getting worse by the day. Not only is he trying to prove his innocence and get out of jail, but now he’s trying to save his own life from behind bars. That’s because Stuart Highway (Ricky Champ) is about to make his life a living hell after he calls one of his old inmates.

After telling detectives that it was Mick who shot him inside the Albert Square pub, the pub owner was handcuffed and taken away for attempted murder. But now it looks like Mick’s situation is only going to get worse, even though he’s doing everything he can in order to make the best of his situation.

Mick tried to use a smuggled phone to call home, but was horrified to find out that a lid from a can of baked beans was all that was taken in order to use it as a bladed weapon.

When Mick asked fellow inmate Fraser Mason if he could use the phone, it was thrown on the floor in front of him and smashed to pieces. He then finds out that Stuart had told his old inmates that Mick was a sexual predator, much to Mick’s shock.

Fraser said, “Now, are you gonna to tell me who you really are? See, I just had a conversation with a dear old friend of mine and he’s told me some interesting facts about you. Fascinating. Stuart. Stuart Highway!”

When Mick proclaimed that Stuart was lying, Fraser added, “You’re one of them. Vile. Mealtimes, exercise, showers, lights out… you be very careful.”

Eastenders airs weeknights on the BBC network and is available on Britbox in the United States. Check your local listings for times.

In the meantime, let us know what you think by leaving us a line with your thoughts in our comments section below. And as always, don’t forget to check back with Soap Opera Spy for all the latest news, updates and spoilers on Coronation Street and Eastenders and all of your favorite daytime television shows right here!

And as always, don’t forget to check back with Celebrating the Soaps for all the latest news, updates and spoilers on Eastenders and all of your favorite British soaps right here!

The Bold and The Beautiful RUMORS: Bill Takes Drastic Measures, Will NOT Lose Custody Without A Fight