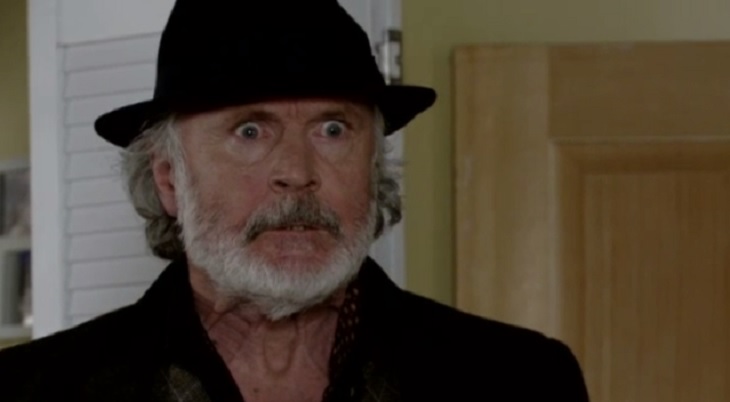 A massive whodunit is brewing on EastEnders, but the who and the what and why are anyone’s guess! I mean, who in Walford doesn’t hate conman Aidan (Patrick Bergin) but in the end will he be the phoenix that rises from the ashes?

In the coming days all of Aidan’s enemies will stick their fingers in the revenge pie, eager to get rid of the thorn in their sides; making for a delicious crescendo that viewers won’t want to miss.

First up, Mick Carter (Danny Dyer) has had enough of Aidan’s meddling and vows to neutralize the threat to his pub and family.

As a last resort Mick will reach out to Mel (Tamzin Outhwaite) who turns him away. Until Aidan threatens her! After this bit of nastiness, the blond vixen decides it’s time to act against the smooth criminal.

So, what’s a more permanent solution than a hitman? EastEnders spoilers show Mel slips Mick the number of a guy who can make all their troubles go away but he waffles; he’s a lover not a fighter!

Until he comes back home and discovers that gas has been spilled all over the place as a warning. Ok, this pushes him over the edge, where’s the phone?

Before he can do anything rash, Mick is given a talking to by wife Linda (Kellie Brightman) and Phil (Steve McFadden).

Phil is also on Aidan’s hit list, and his advice to Mick is to pack up and leave Walford in the rear view mirror. Again, Mick waffles; he’s a lover not a leaver!

Next Mick turns to Vincent (Richard Blackwood) another Aidan enemy for help. Wrong move, as Aidan sees the meet-up and jumps to all the right conclusions. When confronted by Aidan, whose side do you think Vincent takes?

All of these men have a score to settle, and explosive EastEnders spoilers reveal that next week the big dawgs enter the octagon in the Square, in what promises to be a showdown for the ages.