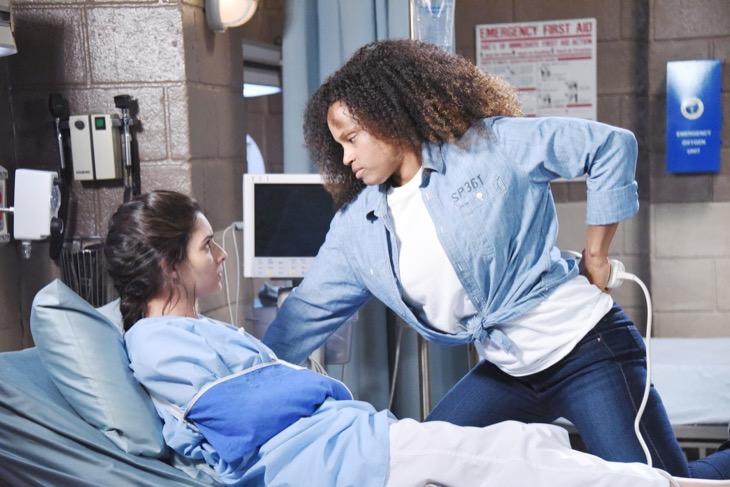 “Days of Our Lives” spoilers for Tuesday, May 29, tease that Paul (Christopher Sean) and John (Drake Hogestyn) will be backed into a corner. Thanks to Theresa’s (Jen Lilley) reluctant tip, Mateo (Andoni Gracia) was ready for Chloe’s (Nadia Bjorlin) rescuers. He quickly gained the upper hand and now they’re at his mercy.

Mateo will gloat about outsmarting John and Paul, but his victory will be short-lived. DOOL viewers saw Chloe pick up Miguel’s (Philip Anthony-Rodriguez) knife. That should come in handy as she tries to take down Mateo. “Days of Our Lives” spoilers say Chloe will be forced to kill her captor pretty soon. She’ll get rid of her enemy and pave the way for a shocking escape.

John, Paul and Chloe will all be headed back to Salem before you know it. In the meantime, Brady (Eric Martsolf) will prepare to give Eve (Kassie DePaiva) and Theresa his decision. He doesn’t want to string them along without an endgame in sight. Brady intends to reveal the woman he’s chosen, but an unexpected development’s looming.

It seems Theresa’s guilt trip worked. Eve will decide to back off and make things easier for Brady. She’ll return his engagement ring and hope he’ll be happy with Theresa. “Days of Our Lives” spoilers say Brady will definitely be taken aback by Eve’s news. He’ll accept this, but additional bombshells are ahead in this storyline.

In the prison infirmary, Gabi (Camila Banus) will just want to go home. She’ll hate that Diane’s (Cassandra Creech) still causing drama. “Days” spoilers say Diane will toss around some threats and the situation will eventually get out of hand. By the time this confrontation’s over, Diane will be dead and Gabi will delay her release!

Elsewhere, Victor (John Aniston) will blow his top. DOOL fans know Sonny (Freddie Smith) fell right into Leo’s (Greg Rikaart) trap, so he’ll have to admit the truth to Vic. The sexual harassment lawsuit will leave Victor furious, so he’ll fire Sonny immediately. Victor really has no choice since this is bringing such a huge scandal for Titan.

It sounds like some exciting scenes are coming up. We’ll give you updates as other “Days” details and rumors emerge. Stick with DOOL and don’t forget to check Soap Opera Spy often for the latest “Days of Our Lives” spoilers, rumors, updates and news.

The Young and the Restless RECAP Friday, May 25: Jack Furious At Billy, Wants To Start His Own Company

Days of Our Lives Spoilers: Sonny And Will Separately Recall Their Last…