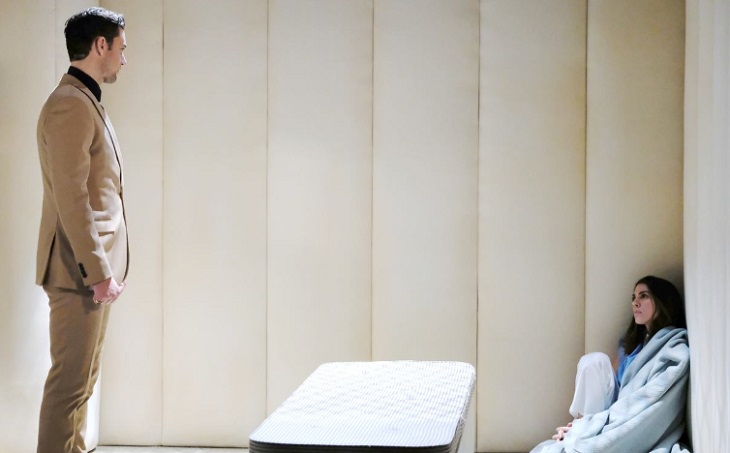 “Days of Our Lives” spoilers for Thursday, November 29, tease that a big comeback’s set to happen at Bayview. Kate Mansi will reprise her role as Abigail, so DOOL fans won’t want to miss her exciting return. Abigail’s in isolation thanks to that altercation with Gabi (Camila Banus). She’s fed up with her mental institution stint and angry with the people who put her there.

Gabi is mainly at fault for Abigail’s nightmare, but Chad isn’t exactly blameless. He went behind Abigail’s back and made a terrible deal with Stefan (Tyler Christopher), which is the only reason Abby was able to be committed. Abigail will lash out at Chad in Thursday’s DOOL episode. “Days” spoilers say Chad will defend his actions, but Abigail won’t want to hear his excuses.

Abby will maintain that Gabi’s lying and grow increasingly frustrated when Chad refuses to believe her. “Days of Our Lives” spoilers say the rift between Chad and Abigail will widen, so don’t miss the hot drama ahead. In the meantime, Ben (Robert Scott Wilson) will keep up his efforts to make some money. He desperately needs a job, so he won’t give up on finding one.

Chad won’t have any other tasks for Ben to tackle, which means the reformed killer will have to look elsewhere. He’ll end up asking Stefan for a position, so the ruthless DiMera will mull it over. “Days” fans will recall that Ben was able to overpower Stefan as well as his best bodyguard. It was quite impressive, so Stefan will keep that in mind.

“Days of Our Lives” spoilers say Stefan will decide he has a place for Ben. He’ll make him the chief of DiMera security, so Ben should be glad to have some cash coming in. Across town, Kate (Lauren Koslow) and Roman’s (Josh Taylor) plan will move forward. They’re hoping to take down Stefan and Kate may think the Ted (Gilles Marini) angle is the perfect way to do it.

Over with Will (Chandler Massey) and Sonny (Freddie Smith), they’ll get some huge news from Leo (Greg Rikaart). He’ll admit that Kate set the sexual harassment lawsuit in motion, so Will’s sure to be in shock. Once Will accepts that Kate’s indeed responsible, you can bet he’ll unleash his fury! Will’s grandmother won’t know what hit her soon enough.

It sounds like some fantastic scenes are coming up. We’ll give you updates as other “Days” details and rumors emerge. Stick with DOOL and don’t forget to check Soap Opera Spy often for the latest “Days of Our Lives” spoilers, rumors, updates and news.