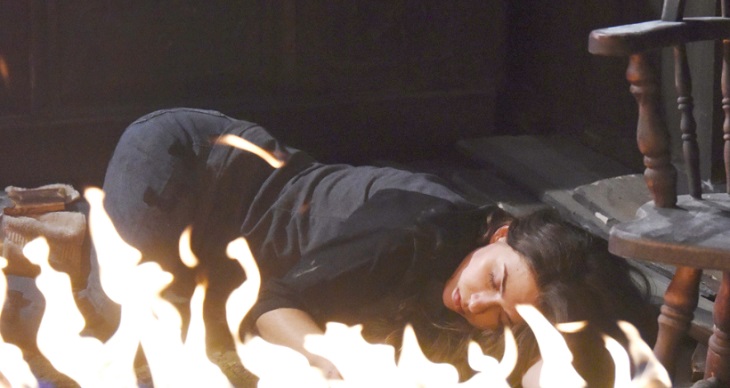 “Days of Our Lives” spoilers for Monday, July 9, tease that Ciara (Victoria Konefal) will struggle to limp out of the cabin. She’ll run into some trouble thanks to that broken leg. Once Ciara tumbles to the floor, she’ll realize she’s officially trapped. There’s no getting out of there without some help, so Ciara will begin to lose hope.

DOOL fans can expect Ciara to pass out from the smoke eventually. Her fate will be in Hope (Kristian Alfonso) and Rafe’s (Galen Gering) hands, but at least they have her location now. Ciara turned her phone for a moment and that was enough to tip them off.

Hope will insist that they have to save Ciara ASAP. She’ll worry that Ben (Robert Scott Wilson) could try to harm her, but things will be far worse than she expects.

The cabin blaze will definitely leave Rafe and Hope in a panic. Fortunately, Rafe will manage to rescue Ciara before it’s too late. Ben will get blamed for this mess, so “Days of Our Lives” spoilers say the drama will continue.

Meanwhile, Will (Chandler Massey) and Sonny (Freddie Smith) will face another tricky situation. Leo’s (Greg Rikaart) car will disappear, so they’ll have a “Days” mystery on their hands. They crammed his body in the trunk, but they’ll probably worry he wasn’t dead after all.

However, it seems likely someone else moved the vehicle. Leo appeared truly lifeless, so Sonny and Will may explore other possibilities. Blackmail could be brewing in the near future. Elsewhere, Brady (Eric Martsolf) will give Eve (Kassie DePaiva) a full confession. He’ll admit that Nicole (Arianne Zucker) murdered Deimos (Vincent Irizarry) and he kept quiet about it.

Unfortunately, Brady didn’t do it out of the kindness of his heart. He used it as leverage to drive Nicole out of town and keep her away from Eric (Greg Vaughan). Speaking of Eric, he may interrupt and wonder what’s going on. Eric might sense that Brady isn’t telling him something, but he won’t be brought in the loop anytime soon.

Eve will want Brady to turn Nicole in and save his custody shot, but that’d be awfully cruel. “Days of Our Lives” spoilers say Eve will just have to take matters into her own hands later! We’ll give you updates as other “Days” news and rumors emerge. Stay tuned to DOOL and don’t forget to check Soap Opera Spy often for the latest “Days of Our Lives” spoilers, rumors, updates, and news.

The Bold and the Beautiful RECAP Friday, July 6: Steffy Learns Hope Is Pregnant